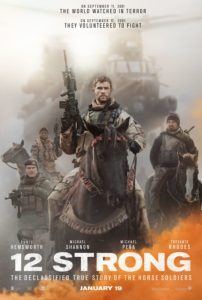 12 Strong Tagline: “19 men attacked our country. The 12 of you will be the first ones to fight back.”

Here’s a true American war drama by Warner Bros. that’s based on the book Horse Soldiers, written by Doug Stanton. It tells the story of CIA Officers and US Special forces that were sent to Afghanistan immediately after the September 11, 2001, attacks.

We learn of the brotherhood of soldiers and their team; the brotherhood is at the base of everything, it’s one of the reasons they continue to do this—yes, to serve their country, but also that brotherhood. There’s nothing like that relationship.

Twelve-year Navy veteran Kenny Sheard, who also served in Afghanistan, appears in the film as the team’s senior medic, Bill Bennett. Bennett talked about the bond in the press notes, “That bond is very important because anything anyone does in the military, they know it’s a team effort. So it felt right to have that camaraderie be a major aspect of the story.”

The ensemble cast also included another real-life military veteran: Jack Kesy, who plays Charles Jones, he served in the United States Marines. He was actually just a few blocks from the World Trade Center when it fell, and served overseas in its aftermath.

When the team is sent to convince General Abdul Rashid Dostum, (Navid Negahban) to join forces with them to fight their common adversary the Taliban and their Al Qaeda allies. Upon arrival, he informs them the only way to fight in the rugged terrain was to ride horses. All 12 soldiers fought against insurmountable odds.

Here’s a clip: Hemsworth speaking, “Every step we take will be on a mine field through a hundred different wars. Odds are we don’t all make it out alive. Shannon, “If we don’t take that city the world trade center is just the beginning.”

The director is Nicolai Fuglsig and the writer is Ted Tally and Peter Craig.

Here’s Another Clip: Hemsworth,”There’s no playbook here we have to write it ourselves. (Music playing in the background, I won’t back down. Hemsworth, “I ain’t losing one man on this team, we’re fighting on horses against men in tanks.”

You’ll be enlightened about this dangerous mission after the attacks and the willingness of these soldiers to fight for America’s freedom.

It’s very intense and realistic; I guarantee you will feel proud to be an American after viewing this film and truly know what it means to be a hero!

This is Sarah Knight Adamson for Hollywood 360 Radio Network, see you next week.