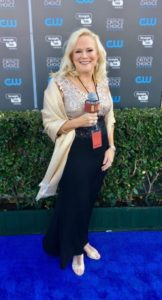 What a joy to attend the Critics Choice Awards on the heels of the women-driven Golden Globes Awards earlier in the week, as women across the globe were inspired by Oprah’s Cecil B. DeMille Award acceptance speech. The mood Thursday evening, January 11, 2018 was exciting to say the least. Everywhere you looked, women−whether celebrities or critics—were beaming. Yes, the room was euphoric in celebration, as finally our voices have been heard.

A few photos of the Critics Choice Awards in sunny Santa Monica California.☀️