Reporting for RogerEbert.com from the Critics’ Choice Awards 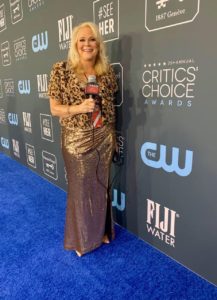 My report from the live show on the CW Network is posted to RogerEbert.com. Here’s an excerpt along with a backstage conversation with Renée Zellweger the Best Actress winner.

I was seated to the left of the stage, next to Rita Moreno, whom I had interviewed ten years ago before hosting a screening of “West Side Story.”

Link to complete article and list of winners: https://www.rogerebert.com/festivals-and-awards/stars-shine-at-the-25th-critics-choice-awards

The 25th Critics’ Choice Awards Red Carpet held at the Barker Hangar Sunday, January 12 in Santa Monica ensued with sunny skies and a brisk, windy chill, the norm for a winter west coast day. Enclosed under a tent, weather aside, stars walked the Red Carpet dripping in sparkling jewels and couture fashion. As a reporter and a voting member of the Critics’ Choice Association, there is reoccurring high anticipation to celebrate stars who have shied away from the Hollywood scene in recent years, reconnect with past talent and welcome newcomers. 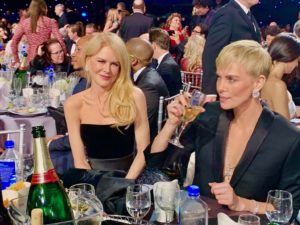 The Red Carpet had a lively vibe, talent beamed, and were keen to engage with press, which always makes our job easier.

The highlight for me was chatting backstage with Renée Zellweger just after she won the Best Actress Award for her role in Roadside’s “Judy.” She thanked her fellow nominees, director, actors, cast and crew. She said, “My Mom and Dad always told me to “just try,” and to her big brother, who said, “Don’t screw it up.” She continued by saying, “I feel so lucky to be part of this part of this celebration of Judy Garland’s legacy, and her humanity and everything that she taught us. Thank you for the ride of a lifetime.” 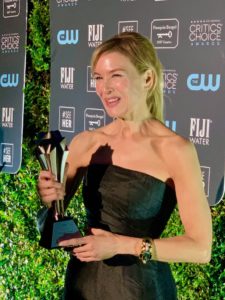 Upon walking backstage, Zellweger was posing for photos with her award, and I was able to snap a few as well, I congratulated her and conveyed my reaction to “Judy” that I had screened in Toronto (#TIFF) by saying, “Your performance brought tears streaming down my face, I’ve been championing you from that moment, I can’t even begin to tell you how happy I am for you, as your work speaks for itself.” She thanked me, then I looked at her and started smiling and said, “You’re never going to believe what I did this past Wednesday evening; I actually hosted a screening of “The Wizard of Oz” at a Classic Cinema theater in the Chicago suburbs. The look on her face was priceless, she had a huge smile, and said, “Oh my goodness,” then I went on to tell her that ten years ago I interviewed the munchkins Jerry Maren, the Lolli Pop Kid, and Margaret Pellegrini the Flower Pot Girl, her eyes grew wide. She said, “Wow, you really did interview them!” She asked me questions about both, and we proceeded to have a conversation about the munchkins, who absolutely adored Judy Garland.” Zellweger was lovely and appreciative of our fortuitous conversation. As I walked away, I said, “I do think you need to start preparing your Oscar speech.” She smiled. 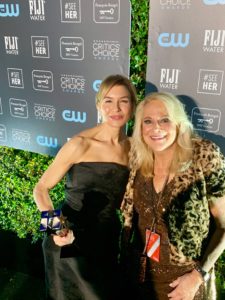 Speaking of Oscars, the timing of the Critics’ Choice Awards this year fell very close to the Oscar nominations, to be exact less than 24 hours before the 5:30 AM announcement. What is noteworthy is that all nine Best Picture nominees were Critics’ Choice Award nominees in the same category. And in the four major acting categories, 18 of the 20 Oscar nominees were nominees in those categories celebrated the previous evening. Academy members begin voting January 30, with final ballots due February 4, only five days before the Oscar show February 9.