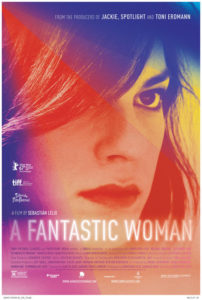 A Fantastic Woman is a foreign film from Chile that is nominated for an Academy Award for Best Foreign Language. (Update, March 4, 2018 A Fantastic Woman Won the Oscar and Daniela Vega presented at the 90th Oscar ceremony.) Focusing on a transgender’s plight with the death of a committed boyfriend, we view first hand the cruel blockages she faces. Chilean director Sebastián Lelio’s (Gloria 2013) centered on a middle-aged woman’s longing for a life, here we find similar themes as Daniela Vega’s (Marina) longs for respect.

Cowriter Gonzalo Maza) along with director Sebastiàn Lelio creates a character that we can’t help but empathize with. When we are first introduced to Marina, she’s in a bar singing to her much older lover Orlando (Francisco Reyes), who astonishingly looks like a younger version of Jeremy Irons. The pair draws us into the story; we wonder how their lives mirror our own. Yes, they care deeply for one another as Orlando has made plans for a birthday trip to Iguazu Falls, which appear in the opening shot of the film. But how does not only the 20-year age difference work but how does the transgender element come into play?

Vega, a transgender, has been quoted as discussing the reality of cisgender actors (someone whose gender identity corresponds with the sex assigned to them at birth) who have played transgender roles, notably Jared Leto who won an Oscar for his transgender woman with Aids in (The Dallas Buyers Club 2013). She said in an interview, “As an acting exercise, I think it’s an interesting challenge,” she says. “I could – and I have – played male characters.”

Writer and director Lelio first met with Vega to discuss the idea of bringing her on board as an advisor to the film before the film was even written. After becoming friends with Vega, Lelio knew he had his lead.

The beginning of the film as stated earlier is about celebration and love. Sadly, the tone changes quickly into a downward spiral. In the middle of the night of the birthday celebration, we see Orlando awakened by shortness of breath. As Marina struggles to carry him down the stairs, she props him up −− and just like that he stumbles all the way down to the landing. A horrified Marnia is able to get him into her car, transports him to the hospital, only to find out a few hours later that he has died from a brain aneurysm. Marina though suffering from shock and grief is now faced with the battle of asserting her rights as an individual to hospital officials and too suspicious police authorities, (remember Orlando’s nasty fall down the stairs). Were they arguing when he died, does she have bruises too? Her plight goes from bad to worse, and she hasn’t even met Orlando’s family yet.

You can only imagine the situation; upon meeting Orlando’s ex-wife she gives the pretense of playing fair, yet only to be seen as an embarrassment. Point blank, she’s asked not to attend the funeral, as harsh words are spoken, “When I look at you, I don’t know what I’m seeing.” The painful expression on Marnia’s face is all we need to see, to know that salt has just been added to her wounded soul. When she does show up to the funeral, she’s thrown out and humiliated further by Orlando’s son and his friends.

The next scene shows us a reflective Marnia in a dreamlike scenario, as the narrative gives way to focus on her plight. By use of split screens and mirrors, we see Marnia dealing with her sexuality and her choices. A tender and beautiful sequence to be sure, we are hopeful for redemption, new dreams and kindness by anyone at this point.

Is Marnia allowed to mourn her lover? Does Orlando’s family have a change of heart? These are questions that are answered−thankfully toward an ending that leads to healing.