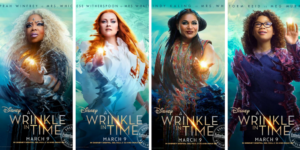 Madeleine L’Engel’s novel A Wrinkle in Time, 1962 was first introduced to me in the late 80s when I began teaching fourth and fifth-grade gifted literature. We considered using it as a unit of study and then realized our Jr. Highs were teaching it. Rich in narrative, creative themes, vivid descriptions and family-centered; this Newberry Medal Award-winning book is a favorite classic in children’s literature. It’s well known that the novel may be ‘unfilmable’ due to the fantasy elements and cinematography. I’m happy to say, yes, indeed it can be re-created for the big screen, and the results are eye-popping while magnificent.

Ava DuVernay, director of Selma (2014), has created a fantasy world like no other. Vivid colors, glorious special effects, while staying centered on family values. There’s so much for all here to take note of and champion; especially a new determined, young lady, Storm Reid, (Meg Murray) to say that a “star is born,” is not an understatement. Her performance under DuVernay’s careful eye is spot on.

To be clear, this is first and foremost a young adult film; Meg Murray is a middle school student. She’s an awkward, underachieving, bullied and grieving teen whose father, Alex Murray (a bearded Chris Pine) disappeared four years prior leaving she, her mother, Kate (Gugu Mbatha-Raw) and gifted brother Charles Wallace, (Deric McCabe) to fend for themselves. Meg’s troubled classmate Calvin (Levi Miller), also a loner joins the siblings in their pursuit to find their father.

As a young adult film, it delivers and speaks to kids. On the whole, it is disjointed and purposely slow at times. If one hasn’t read the book, you may be in the dark as to exactly what is going on. Which leads back to the comment of unfilmable — I wholeheartedly recommend the film, just know it has a few problems that I’m willing to overlook for kids and adults in order to have the opportunity to experience their beloved novel on the big screen.

The great script by Jennifer Lee and Jeff Stockwell adapts the concepts of tessering — passing through distant science fiction planets of Uriel, Orion, and Camazotz. And how does this time travel occur? Via magic that’s based on passing through a tesseract, a twist in the laws of physics, which is also a convergence of space. And why tessering? All to rescue scientist Dr. Murray who in the film told Meg he wanted to ‘shake hands with the universe.’ Heavy stuff for middle-school kids indeed, this is exactly why the book is a revelation in children’s literature. Kids absolutely love this family-centered, rich in higher-level vocabulary book allowing a child to enter into a dangerous journey to save a parent.

Let’s not forget Oprah, Reese and Mindy, the fantasy super-powered women in the story. Their roles are enhanced along with several elaborate costume changes. Spanish costume designer Paco Delgado had a clear vision for Oprah’s (Mrs. Which’s) character. The wisest of the three draws from the cosmos exemplifying energy, and light while displaying a warrior-like appearance. Her silver sequin eyebrows, silver ultra shimmery lipstick, perfectly coiffed hairstyles in numerous shades do appear, as they were taken from the stars; shiny, bright and strong.

Reese Witherspoon (Mrs. Whatsit) is the first super-powered woman to appear before the children to persuades them to help rescue their father as she knows his whereabouts on Camazotz—a planet in which mind control is in play with all of the inhabitants. She convinces Meg that she can bring her father back to planet earth.

Mindy Kaling (Mrs. Who) speaks in a virtual encyclopedia of suitably chosen literary quotations. These words offer strength, and courage to the kid’s journey while enhancing the tone of the film. These words are key—providing inspirational life lessons for all to embrace.

Does the journey become too dark in tone for youngsters? At times, it is scary, due to Charles Wallace’s mind control under ‘It.’ He is in this state a little bit too long for my liking and brutal physically and verbally to Meg and Calvin. Think Damien from The Omen (1976), if your child can distinguish between fantasy and fact, then they should be ok. Also, if they know ahead of time that Charles Wallace is under mind control, then, by all means, see it.

There’s not really a monster per say, other than a large black rotting tree with flaming branches that does grab hold of Meg and drag her downward into what appears to be a bottomless pit. It could be somewhat frightening; it’s all about individual sensitivities.

The ending is fantastic; there’s lots of hugging and talk of family. Dad, says to Meg, “Instead of shaking hands with the universe, I should have been holding your hand.” Again, parents aren’t perfect, and they make mistakes—which in this case allows for a fantastic journey of bravery and facing fears. Not to mention that Meg finds a new cute boyfriend, Calvin. And Calvin—also gains the courage to confront his tough father—and he does get the girl in the end!

The Bottom-Line? While both beautiful and family-centered, those new to the source material may wonder what exactly is happening.