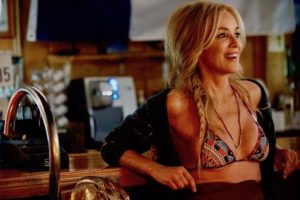 Should a 60-yr-old actress permanently be typecast as a mom or a grandma? Sharon Stone can answer that question—the answer—an emphatic no way! When first-time director Susan Walter took a chance on a major script change from Stone, she opened the anti-ageism floodgates for all females. You see, Walter sent the script to Stone inquiring if she’d play the lead’s mom—Stone replied back that it would be more interesting to play the lead daughter role, not to mention it’s a storyline viewers haven’t seen before. What’s fascinating is Walter’s rely, that the character she had in mind wears a bikini, plays beach volleyball, smokes pot, dances in bars, drinks shots, doesn’t want marriage and has casual sex. Stone’s message, “Don’t change a thing other than the age.”

Together they have finally broken through the ‘old’ Hollywood stigma (pun intended) by creating a contemporary character in which women can truly relate. Just because you’re approaching 50 doesn’t mean you can’t be intelligent, sexy, single, desirable, playful and still have dreams of an exciting career. We’ve seen many films with a lead guy in this position—sometimes it’s called; for lack of a better term—‘The Peter Pan’ syndrome. And now, frankly that I look at the situation through a female’s eyes, I see that label as antiquated. At age 50, is it so important that we (men and women) have everything figured out, especially those whoppers—love life and career? 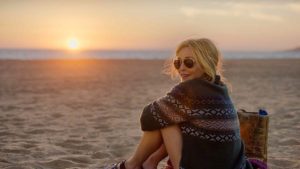 Stone plays Senna a struggling fashion designer whose emotional state could be a character in the film; it indeed structures the tone, her actions, and the reactions of the cast. One minute she’s happy, the next—not so much. One thing we do know for sure, she doesn’t need a man to define her, nor does she need one simply to please her mom and friends. Her world does turn upside down when she falls in love with Adam (Tony Goldwyn), as he has plans of his own.

So, how good is this movie? I say, good enough to see it, as you’ll certainly see gorgeous Sharon Stone having the time of her life in this part, serving as a role model, fighting ageism and busting through old Hollywood traditions. And, if anyone can pull it off, she can. Check out a clip from the film Casino (1995) she played Ginger (in her Academy Award-nominated role) at age 37, and Robert DeNiro played her husband at 52. Yes, there’s a 15-year age difference. What I appreciated, as well about All I Wish is that both Stone and her new exciting guy Adam are comparable in age.

Are there problems with the film? A few, the sunset scene continuance was a little off, (I doubt if anyone will notice) the sun seemed to disappear into the horizon yet reappear in another shot, to be fair; it could have been the camera angle or the lighting that should have been darker after sunset. The repeated birthday celebration scenes needed trimming in number; the technique became monotonous. Having characters explain Senna’s actions similar to those ‘talking heads’ in documentaries triggered redundancy; the film does speak for itself—loud and clear.

My favorite scenes were with Stone and her mother, the amazing Academy Award-winning Ellen Burstyn. Their chemistry was spot-on, you could feel the respect, love, and admiration between them. The humor in the film at times is hysterical; Stone’s contagious laughter brought light-heartedness and entertainment.

What the films says to me is here’s a portrait of both older women and men living life to the fullest, and not settling for second best just because society sets deadlines. It also gives hope to those who are divorced or widowed. Life is not over—on the contrary—life is just beginning.