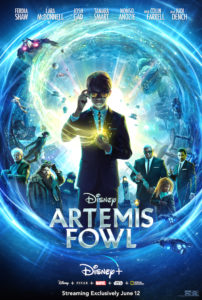 Next up: “Artemis Fowl.” It’s based on the 2001 fantasy novel by Eoin Colfer. The film stars Ferdia Shaw, Lara McDonnell, Josh Gad, Colin Farrell, and Judi Dench. The setting is Ireland, and 12-year-old Artemis Fowl is determined to rescue his father, who has been kidnapped. Artemis’s Dad is suspected of being a criminal mastermind. Artemis’ butler/bodyguard Dom reveals the true nature of his father’s work, and that there is a vast underground magical realm. He finds out that a good fairy who has gone bad kidnapped him. Artemis then teams up with a young 84-year-old fairy Holly (McDonnell), who wants to clear her own late father’s name.

Sound confusing? Unfortunately, director Kenneth Branagh creates more chaos in providing a visually dark and muddled palate. At times, it’s nearly impossible to ascertain who or what is in the frame. Scenes are viewed through Artemis’ and Holly’s eyes, as well as narrator Mulch (Gad), a thieving dwarf, and the short-fused fairy Commander Root (Dench). The result is overkill.

While all are looking for the Aculos, a solid magical object that will solve their problems, most of the film’s running time takes place during a military siege during which Root (Dench) deploys Mulch to break into Fowl Manor.
The Bottom-Line: I’m out 2 ½ stars out of four. The film is dark in tone, complicated, and very hard to follow. I did like all of the actors, and the books are fantastic! The action set-pieces feel both superfluous and overcomplicated with mythology and effects.

Check out the Radio Podcast on Hollywood 360 Radio Network: http://www.hollywood360radio.com/dads-★★★★-and-artemis-fowl-★★%C2%BD/