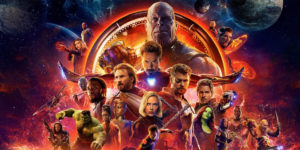 Both Exciting and Exhausting, the Underwhelming Supervillain Further Bogs Down the Overwhelming Amount of Characters and Scope

Avengers: Infinity War is part one of a ten-year Marvel finale, that includes 18 movies starting in 2008 with Iron Man and the comic book superheroes that began in 1941. Truly an unparalleled cinematic feat, in not only scope—but also the pure number of characters and universes—good luck keeping track of it all! The film advances through insane pacing—in and out of universes; Earth, Knowhere, Vormir, Zen-Whoberi, Titan, and Nidavellir all while a gazillion characters dart in and out.

Unfortunately, the prolonged storyline leaves little time for character development, which creates merely a celebrity cameo effect. Good luck keeping track of the 34+ characters; I had a difficult time, and I’ve seen all 18 films. This being said, my main objection to the film is the dark-tone played out through torture, violence, beatings, and deaths. Yes, there’s humor, especially when Iron Man (Robert Downey Jr.), Hulk (Mark Ruffalo), Spiderman (Tom Holland), and Thor (Chris Hemsworth) are joking around, although it happens in short spurts. I secretly rejoiced when the Guardians of the Galaxy’s, Chris Pratt’s (Star-Lord) first appears on screen to the blaring catchy tune Rubberband Man. He’s always comical while natural in his role.

At the center of the storyline is the villain Thanos, who aspires to be a god and bring balance to the universe. He can achieve this by collecting all of the infinity stones that will grant him unparalleled power in the universe. Make no mistake, the ginormous Thanos (Josh Brolin), who’s leather-clad face and a bulging rectangle lined chin—has a sole intention—kill half of the world. He proclaims, “kill away” in the opening scene before the title card. The problem—he doesn’t look like a scary psycho-death fiend. More like the ogre in the Jack and the Beanstalk fairy tale. When comparing the comic art drawings to the CGI movie depiction, his face is ultra frightening in the comic art; a dark purple color with menacing tiny glowing eyes, and huge teeth. Here, his face is flesh-colored, with a closed mouth and squinty, yet, somewhat normal eyes.

Loki taunts Thanos near the beginning of the film by stating, “You’ll never be a god!” Let’s just say that didn’t go over too well. Viewing the film at times was confusing and frustrating. Just as we return to the tech-advanced land of Wakanda in the Black Panther film, not enough time is allotted for immersion into this epic world. It’s a double-edged sword; yes we are thrilled to be back, yet only for a few minutes then we are either dragged out to another universe or to a battle on a boring flat landscape. The perplexing aspects are decidedly the numerous characters, and locations.

Gamora (Zoe Saldana) has memorable scenes with both Star-Lord and Thanos, while Black Widow (Scarlett Johansson) has limited screen time. Benedict Cumberbatch (Doctor Strange), narratives play to his dry sense of humor, although in a torture scene involving long needles that pierce through his skin, we see his vulnerability. Both Chadwick Boseman (Black Panther), and Anthony Mackie (Falcon), are unfortunately limited, while Paul Bettany (Vision), has extended grand scene time as he has one of the desired stones.

As the stones are gathered by Thanos, proclamations are made, people are killed, explosions discharge and all of the superheroes fight with all the superpowers they possess to save as many lives as possible. Stay for the ending credits, as part two is set up with a familiar character.

If you seriously would like to prepare for the movie, Marvel Cinematic Universe (MCU) tie-in comics will prepare you for the film, the Avenger: Infinity War tie-in books are sold in two separate books. Their purpose is to expand stories about existing characters or to make connections between MCU projects, without changing the universe or presenting new ideas or characters.

The Bottom-line: While grand in scale, the characters are lost in the dark storyline.