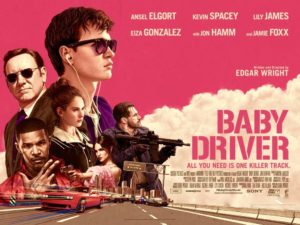 Adrenaline Rush From Start to Finish

Do fast film car-chase scenes like Bullit, The French Connection, Ronin, the Mad Maxx Series or the Fast and Furious series rate highly with you? If so, then here’s a film with not only incredible get-away chase scenes, but there’s a creative twist—music is the main source that assists in the driving. Baby Driver is an original—a musical car-chase film—with a good-hearted leading actor and the bonus of an old-fashioned sweet love story.

Here’s the great news: so far, it’s one of the best movies I’ve seen this year, and I will guarantee you’ll be on the edge of your seat for most of the film. I’ll resist writing the typical cliché “fasten your seat belt,” however — extra restraint may be needed to stay seated—the possibility of swerving side to side, toe-tapping, or even humming along while viewing “Baby” strategically driving at hyper speed to a pulsating playlist is virtually impossible for one to remain calm. Come to think of it, what would be perfect is one of those over-the-head metal pull-down bars on the Disney rides that locks you in because, at times, I did feel immersed in a wild ride simulation. The film is aptly realistic cinematically while choreographed to perfection. I loved it.

Baby (Ansel Elgort) is the self-given name of a musically talented young man who’s a getaway heist driver. He suffers from tinnitus, donning ear buds connected to an old-school iPod chock full of mixes that he created to help block out the constant ringing in his ears. It’s revealed that as a young child he was riding in the backseat when his parents were killed in a car crash, leaving him with the hearing condition. We also find out he’s been in and out of foster care and at times on his own since the age of ten. Currently, he lives with his deaf somewhat older foster dad, Joseph, played by the highly animated C. J. Jones, who is deaf both on screen and in real life. He communicates via sign language.

We know from the get-go that sunglassed Baby is troubled, as he doesn’t mix well with the heist teams that are formed by Doc (Kevin Spacey), a man Baby stole from as a teen; thus he’s been paying off the debt in return. Baby’s persona does garner trouble. Harassment is the norm by Doc’s hard-core criminals; both Bats (Jamie Foxx) and Griff (Jon Bernthal) are suspicious of Baby—with good reason. Secretly, Baby wants out of the heists and tells Doc they’re even with the next job. Heist team criminals Darling (Eiza Gonzales) and Buddy (Jon Hamm), the “love birds,” try to help him a little, but are too self-absorbed to really care or give him much notice, for that matter.

Out of the gate the first time, we see Baby’s 80 mph getaway city driving to the blaring tune of “Bellbottoms” by the Jon Spencer Blues Explosion. It’s a jaw-dropping experience. Director Edgar Wright creates a new normal in that the beats of the music are in sync with the action; from everyday sound moments as the swish-swish of windshield wipers, slamming doors, squealing tires, doors locking, the tapping sound of typing a text message, seat belts clicking—on and on and on. Wright highlights these sounds, and I’m not sure I’ll ever view a movie the same again—yes, the bar has been raised.

The romantic thread is woven by use of an old-school diner with a singing songbird waitress named Debora—Cinderella’s (2015) own Lily James. To say that Baby is smitten with her from first sight is an understatement—Baby is head over heels in love and shares her stated goal: “All I want to do is head west on the 20 in a car I can’t afford with a plan I don’t have.”

Lily James is perfect in her role; she’s naïve about the world; guessing that Baby is a chauffeur driver for “famous people.” She’s the perfect Ying to Baby’s Yang—he’s seen the grittiness of life; to him, she’s the innocence that was robbed from him as a child. Both actors have a spot-on genuine chemistry, so much so that their storyline takes the lead. So much so for me as a viewer, a slight smile stretched across my face each time they were on screen together. The exceptional acting by the pair is pure joy.

By this time in the film, we’ve seen Baby’s dilemma, met his heartthrob, and are wildly rooting for him to leave the “fast lane” (sorry, I couldn’t help myself), violent illegal life. When I say violent, I mean violent. Not so much the gratuitous violence as in Quentin Tarantino’s films, of which Wright is a close friend, but mainly we see real life bloody gun shoot outs. Although rewinding back to the ending, Wright’s style does have definite shades of Tarantino’s flair. Each chase scene job is more intense than the next, transforming Baby from a young adult to a man as he’s witness to people dying right before his sunglassed eyes. The shades and earbuds become a metaphor of their own—hear no evil, see no evil. Again, a brilliant script, with the addition of “showing the consequences for actions” that was exactly what I was hoping for in the script. Yes, Baby does recognize that as a driver he is a criminal, just as those who steal the merchandise.

In conclusion, this reviewer was somewhat nervous about seeing the film at my local theater with a random crowd, as I knew I’d be unconsciously reacting. My dream scenario would have been to attend the premiere viewing at SXSW in March 2017; next in line would have been my Chicago press theater Lake Street Screening Room, as critics do react in loud and crazy ways. You see, I knew this was going to be an awesome film; I read that upon the ending of Baby Driver in Austin’s SXSW, the crowd leaped to their feet in furious applause.

I saw BABY DRIVER this afternoon with a bunch of my friends. We hollered and clapped. It’s that kind of movie. Ultimately cool.

Strategically choosing my seat didn’t help much as I entered the theater, as I chose an aisle that had many empty seats on both sides of me. Sure enough, as the theater began to fill up, two twentysomethings sat only one seat away from me. My fears were for naught, as during the first chase scene, the guy next to me bolted straight up as he began clenching the arms of his seat and the other guy’s feet were wildly tapping. As for me—most of the film, I was humming to the soundtracks of Hotel California, Radar Love, and Baby Driver—most likely off-key.

The Bottom-Line? Edgar Wright’s creative mix of music with everyday sounds has upped the bar in filmmaking. The choreographing of chase-scene driving with musical beats and sounds produces exhilarating sequences. I can also recommend downloading the spectacular soundtrack. Notably, we’re now privy to a new kind of chase driver, one with a good heart and a musical soul.