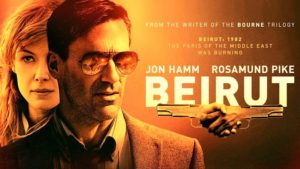 A Triller with John Hamm Leading the Way

Beirut once known as the Paris of the Middle East hasn’t seen those days of glory since the 1975 Civil War, the 1982 Lebanon War with Israel, the 2006 Israeli conflict and the current continuing terrorist attacks. The film begins in 1972 exploring the origins of the city’s downfall in a gripping spy thriller anchored by an outstanding performance by Jon Hamm.

U.S. academic Mason Skiles’s (Jon Hamm) entire life changes in a flash. During a raid his wife is killed in the crossfire as Palestinian terrorists kidnap a teen boy, Karim Abou Rajal (Idir Chender-older version) that’s been staying with them as a family member—the boy’s older brother Abu Rajal (Hicham Ouraqa), a notorious Palestinian terrorist is linked to the recent Summer Olympics massacre in Munich.

Fast-forward ten years, Skiles an expert labor negotiator who is drowning in grief by the death of his wife while routinely hitting the booze, has sleepless nights that leave him in a weary state. U.S. intelligence agents soon entice Skiles back to Beirut when a his former friend, a spy is kidnapped.

The last place Skiles wants to revisit is Beirut, as that’s where his life fell apart in a matter of minutes. However, he sees a chance to save his friend and discover the truth about the teen refugee, Karim, who lied to him about being orphaned when in fact he has a terrorist brother.

Chaos ensues from the moment he lands, as the tension never lets up. He’s constantly being tested and forced to reevaluate situations, as some of the players aren’t as reputable as they appear. The film changes to one of survival, and that is the survival of Skiles. An interesting twist to be sure, although Skiles oddly thrives on it. His fast thinking followed by sharp narrative is delivered in an authoritative, yet, ultimate manner. Hamm’s negotiating scenes are the best in the film. Yet, the film like other Middle Eastern plots have so many conflicts and players to keep track of; it does become confusing and hard to follow at times.

Hamm and co-star Rosamund Pike, (Sandy Crowder), a CIA Operative have chemistry, and they work on screen, I just wish there would have been some more personal scenes with them. One of the problems is the duo are typically taking a back seat to the political drama that’s taking place.

The screenplay by Tony Gilroy — whose previous writing credits include The Bourne Identity (2002) and its three successors — provides a strong foundation for the film, demonstrating a solid understanding of the undercover world. Director Brad Anderson, The Machinist (2004) and Transsiberian (2008) maintains a steady flow of action, tension, and suspense. Using a hand-held camera creates a tone of realism and urgency.

This is Hamm’s movie from start to finish, set against the backdrop of war-torn Beirut; he’s a tortured soul who’s struggling to find his way through a maze of violence and betrayal.  In many ways, he’s similar to the tumbling building walls and rubble of the city—as his psyche is in need of healing. The twists and turns in the film lead us on a thrilling chase with redemption at its core.

The Bottom-line: No doubt, this is Hamm’s finest role to date after his Mad Men series—although I’m also a big fan of his role in Baby Driver as the ‘bad guy robber turned killer,’ the difference in roles is the fact that Hamm’s the main lead in Beirut.