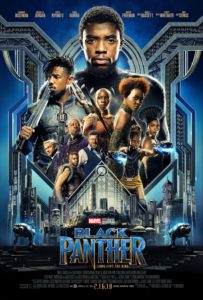 Black Panther is based on the Marvel comic book character, and raises the bar for all comic book films going forward. The film’s genre is Drama, Science Fiction, and Fantasy; founded on the Black Panther character by Marvel Comic Book writers Stan Lee and Jack Kirby. It made its debut appearance in 1966 in Fantastic Four Vol. 1 issue 52.

Black Panther the film is truly a cultural milestone, presenting an Afro-centric viewpoint — while highlighting current world issues of race, class, broken families, and gender inequality. Above all, it’s a beautiful, creative, and timely film. I highly recommend it for all ages, depending on parent guidance. I still get chills recalling my thoughts of “pure joy and elation” upon the rolling of the credits. In short— I loved this film!

Opening with a back-story of the five tribes in Africa who’ve battled throughout the years while enlightening Black Panther’s myth, we are given a portrait of the high-tech city of Wakanda along with its secrecy. Fast forward to 1992 in Oakland, CA: a young boy, Erik Killmonger (Michael B. Jordan), is left behind to fend for himself in order to maintain a family lie. His father, who appears magically, also leaves magically by ascending into the sky via a high-tech spaceship.

Fast forward again to present-day in the city of Wakanda, Africa. We meet T’Challa/Black Panther (Chadwick Boseman), who, after the death of his father, becomes the King of Wakanda, a technologically advanced and isolated nation in Africa. The film centers on the life of T’Challa after the events of Captain America: Civil War, the discovery of another relative, Erik Killmonger, who challenges the crown and the mistakes of family. Writer and director Ryan Coogler (Creed, 2016; Fruitvale Station, 2013) knocks it out of the park! To sum it up — a triumph of a film.

Coogler is quoted in the production notes as drawing similarities between Captain America and Black Panther. “Cap’s universe and the Black Panther’s are closely related. You have the vibranium [a fictional metal used to construct Captain America’s shield, and is used in the construction of Black Panther suit] connection and the super soldier connection. Captain America tends to be a character that’s easily defined. For Cap, it is black and white, whereas Black Panther exists in the gray area. In addition to being a soldier, he has a more important job, which is a politician. He’s a king whose world is extremely complicated. He’s constantly making choices in the fog of politics and in the fog of war.”

The eye-popping set designs by production designer Hannah Beachler are a sight to behold. Rich in color and detail with shades of African patterns, the world of Wakanda is strikingly gorgeous—Beachler’s research trips to Africa played a major role in the design process. Coogler’s bold style shows us long tracking shots with perfectly choreographed action shots by Oscar-nominated cinematographer Rachel Morrison. During the action, Kendrick Lamar’s electronic hip-hop score sets the course tonally for crossing back and forth from modern-day to past African tribal rituals.

Boseman is no doubt the king here, but it’s obvious that he steps back to let others shine, especially the three solid women leads: Lupita Nyong’o as Nakia, a Wakandan spy and warrior; his Queen Mother Ramonda, played by the incomparable Angela Bassett; and his ferocious, tech-savvy little sister Princess Shuri, a newcomer British actress Letitia Wright. These exceptionally well-written strong roles raise the bar for on-screen women and provide an excellent role model platform for the world to champion.

There’s so much to love in the film, but perhaps the most thought-provoking story element is the role of Michael B. Jordan as the “anti-hero.” His performance is outstanding as Erik Killmonger, the brother who was abandoned and left to fend for himself on the rough streets of Oakland, while his family had the luxuries of Wakanda’s wealth. The themes here are timely — displaying an in-your-face parenting message for all to heed. Here’s a fitting line: “Don’t let your parents’ mistakes define you as a person.” As a former teacher, parent, and grandparent, I applaud this storyline and encourage more in the same vain, as it truly helps all of mankind.

I guess what I’d like you to take away from this review is my strong urging for you to see the film. If you’ve ever thought about seeing a comic book film, this one should not be missed on the big screen. It is epic in so many ways and important for all of us to experience, start discussions about, and champion.

Bottom-Line? Check the movie times at your local theater, experience the film for yourself, be supportive of the positive change in strong women’s roles, and finally, the new turn in #notsowhite cinema.