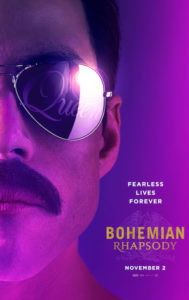 Any attempt to recreate the pure magic of the British rock and roll 70s band Queen—all depends upon casting the lead role of the eccentric, ultra-talented Freddie Mercury—in this case, Rami Malek as Mercury wins. Upon his first appearance, we are blown away. His stage presence is magnetic; the specific posture, the strutting, the confidence, the theatrics are Mercury’s initial noticeable traits, and that’s just the first impression—when he sings, we are totally in awe. Yes, I’m thrilled to write that Queen fans will rejoice as Malek has given his all in this Academy Award nominated worthy performance.

Also, noticeable is the casting of the other Queen band members—Gwilym Lee as Brian May, Ben Hardy as Roger Taylor, and Joe Mazzello as John Deacon—all of these actors also closely resemble the original band—together with Mercury, their performing, song-writing, shenanigans, camaraderie, and arguments are the best part of the film. Additionally having May and Taylor on board from the beginning gave producer Graham King access to personal archives, wardrobes, and memorabilia, in fact, some of the actors wear actual clothing from Brian May’s closet.

Queen’s legendary set at Live Aid in 1985 bookends the film, with great cinematography, and a stellar performance that has been named one of best live performances of all time. However, the film has faults; it’s in the details, where are the beads of sweat on Malek’s brow as he runs across the stage? Where is the breathlessness? In checking my copy at home of our four disks “Live Aid” DVD box set, sure enough, by the third song, Mercury is soaked with sweat, and he’s clearly panting—taking fast, deep breaths to catch his breath. One would typically look to the director for those mistakes, yet director Brian Singer was fired two weeks before the film’s completion, so in this case, it’s hard to say? Unfortunately, there are other mistakes in the film, mainly, the fact of exactly when Mercury contracted AIDS and when he told the band of his condition. Disturbingly, Mercury’s sexual preferences are addressed in a judgmental tone, and we aren’t given any depth to those relationships. Lastly, there is a scene in which Mercury, supposedly garners a big offer to go solo, causing him to break up the band, but in fact, drummer Taylor already had two previous solo records.

I’m never comfortable with filmmakers changing dates and facts to suit their purposes; however, there’s enough that’s been written about Mercury so fans can easily find the truth. In my opinion, when writers change dates in films, this only causes speculation, and problems for the film. Due to all of the great discoveries about Mercury in “Bohemian Rhapsody,” fans may be forgiving. His family heritage is examined, his name at the time of his birth is Farrokh Bulsara, arriving on September 5, 1946, in Stone Town, Sultanate of Zanzibar (now Tanzania) he worked as a Heathrow airport baggage handler and is bullied when called “Paki.” His love for Mary Austin played by Lucy Boyton is clear; he left most of his estate to her and granted her access to scatter his ashes after he passed away from AIDS in 1991 at the age of 45. They remained close even after their divorce, each with new partners; Mercury had a seven-year relationship with Jim Hutton, which lasted until his death. In 1994, Hutton released a book entitled ‘Mercury and Me,’ a memoir of his relationship with the legendary singer, they each wore wedding bands before it was in vogue to do so as a gay couple.

Despite the choppiness, uneven tone, and the cutting from one segment to another without smooth transitions, in the end, Malek’s dynamic performance along with the other band members won me over. The concert arena scenes are truly magical; the pulsating foot stomping of the frenzied crowd, the crowd echo singing along with the band is what makes this film memorable. A sad fact became a realization; as a fan, I never saw them perform in person. However, their music has been recreated to near perfection for Queen fans to enjoy in this very film, and for new younger fans to discover and that is what really matters. Apparently, it mattered a lot, as the audience in my packed IMAX theater cheered and applauded at the conclusion.