The Sisterhood of the Traveling Wine Bottle

For those of us that are currently in a book club or those of us who’ve been in one in the past, we are undeniably privy to the fact that the book is never the star of book club it’s the wine and the sisterhood. I’m pleased to say; in the film, Book Club director/writer Bill Holderman and writer Erin Simms got this right for their debut rom/com.

The collective star power cast, Jane Fonda (Vivian), Diane Keaton, (Diane), Candice Bergen (Sharon), and Mary Steenburgen (Carol) all friends since college gather monthly for their book club. Vivian decides to spice things up by choosing Fifty Shades of Grey, the trilogy. As stated, the film doesn’t center on the book or books; it’s about using them as vehicles to generate conversations that will seep over into their romantic lives, or possibly lack thereof.  So call your friends, choose a theater serving wine as Book Club has so much to say about older women and the realization that we should all be living our best fulfilling life, despite what society may proclaim.

This wildly comical, smart film shows older female characters taking risks in order to find their voices; thus unleashing dormant mindsets. In Hollywood’s blatantly under-served market, the ‘star power female foursome’ of Bergen, Fonda, Keaton, and Steenburgen are a fresh respite; these seasoned actors could all go toe to toe with the Sex and the City girls. The film gives encouraging notice to the younger crowd of what the third act in life should look like, by providing an understanding that life isn’t over just because you’re a certain age.

Book Club explores individually, the four women’s romantic lives, and their attempts to either spice up the game, be open to love again, or in two of the women’s situations get back in the game. Here’s the great news, the film also takes a more in-depth look at ageism in our society, a smack dab, in-your-face interpretation. What behavior is acceptable to an older woman? Shouldn’t knowledge and wisdom count for something? After viewing this empowering film, I’m here to tell you that Hallmark’s card and party section of “Over the Hill” black party themes is yesterday’s news! Growing older should be a celebration of a continued journey filled with knowledge, growth, risk-taking, facing your fears all-leading to self-actualization—that aha moment of realizing your true self.

Steenburgen the musically talented singer and dancer plays her role as sweet as honey, yet there’s a twist, she’s an underhanded schemer, although happily married to Bruce (Craig T. Nelson), she longs of igniting the fire that has since burned out of their love life. With the help of her friends and the racy Fifty Shades books she devises several covert plans, puts them into action while we see the hilarious or not so comical results.

The sassy successful, real estate mogul Fonda has dated most of her life but has built up walls to protect herself, thus avoiding intimacy; she’s missing an emotional attachment. When a past boyfriend played by the ever handsome Arthur (Don Johnson) circles back into her life, she’s willing to give love a second chance. Her journey is poignant as she faces the challenge of being emotionally vulnerable and hurt.

Keaton plays her typical insecure, pleaser role as a recent widow after 40 years of marriage and is reluctant to get back into a romantic situation, especially as her grown kids discourage any male friends. Her life heats up when she meets the suave and unwavering Mitchel (Andy Garcia). Their magnetic chemistry shows on screen, as their improv scenes are natural; recalling their fantastic performances in The Godfather Part Three, (1990) the last time they worked together.

Bergen is a workaholic single federal judge who’s lost her belief in herself.  Her obstacle is her own self-worth; a palpable victim of how she views society judges her: That a woman of her age is no longer pertinent, is no longer sexy, and should no longer be in a physical relationship. She’s closed that door, living a dedicated life to her career; of being a very successful, powerful federal judge and after all, she does have a cat for company. Married for many years to a bland guy, (Ed Begley, Jr.) salt is added to her wounded spirit, he’s engaged to a younger woman less than half her age whom he met on a dating website. Again, with the help of her sisterhood, she gets back in the game, (look for a hysterical dressing room Spanx scene), her first date is none other than tax attorney (right up her alley) Einstein (Richard Dreyfuss). Incidentally, I’ve had the pleasure of interviewing Dreyfuss; he’s a no filter kind of guy, all around. Screenplay writer Erin Simms shared with me that he told her, “I think if there’s going to be a Book Club 2 that I should have a part in that, I absolutely want to work with Candice Bergen again.” Simms, grabbed her notebook, with pen in hand and documented his statement and replied, “Duly noted Mr. Dryfuss!”

The gloves aren’t off here, or the clothes, but the filters are, which adds to the believability of the older age comedic situations, in this Chardonnay sipping tale. All four award-winning women have nothing to prove anymore career-wise, they are clearly working because they choose too. Does it mean they’ve simply dialed in their performances? No, never, not these actresses, they offer their esteemed professionalism to the highest degree of their craft. These are women to be admired for their years of hard work and dedication in an industry that has typically undervalued women. Each has paid her dues and paved the way for generations to come. They should be applauded!

The Bottom line: Book Club is smart, funny, deeply rooted, all while giving the world a mirror to how ‘old age’ should appear. 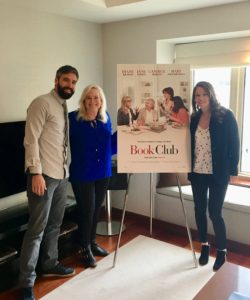 Check out my interviews with Bill Holderman and Erin Simms https://www.sarahsbackstagepass.com/bill-holderman-and-erin-simms-interview-book-club/