A Visit With Warm Fuzzy Friends

Oh bother, as Winnie the Pooh would say; this is not the live action over-the-top film kids and adults may expect; however, it is true to the laid-back nature of the books. If you’re looking for a ‘bear hug of a movie’ Winnie the Pooh and his enchanting forest friends will not disappoint. Full of heart—garnering a perfect family message—spend quality time together, by just being together. Forget those extravagant hour-by-hour family itineraries—take a walk in the countryside, have a picnic, throw sticks in a pond and call it a day. We can all learn from a lovable bear’s unassuming logic—be with the people you love, go on adventures and help each other along the way. 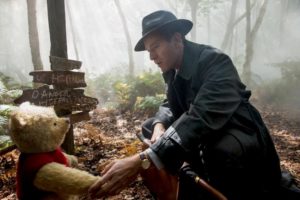 Bringing you up to speed, Christopher Robin a young British boy and his beloved stuffed bear, Winnie the Pooh first appeared in a collection of verses written by author A.A. Milne in a book entitled “When We Were Very Young” in 1924. The follow up were books and newspaper articles filled with stories of the imaginary adventures of a happy-go-lucky boy, Milne’s son, Christopher Robin, his honey-loving bear, along with the rest of his stuffed animal collection of Piglet, Tigger, Eeyore, Kanga, and Roo; Owl and Rabbit were written in as make-believe forest friends in later books. The setting for the books is the fictitious Hundred Acre Wood based on Ashdown Forest in East Sussex, England where the Milne family lived. Embraced by readers of all ages around the world the beloved books along with their signature illustrations by E. H. Shepard are undeniably the most popular children’s books of all time. 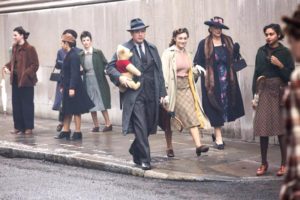 The film begins with drawings of the beautiful artwork of the books continuing in sequence until a young Christopher Robin’s last days at home before he’s off to boarding school. We view Winnie the Pooh and the gang in a delightful, lively scene around a table in the woods drinking tea, and eating cake during the send-off party, each displaying their distinct personalities. Owl and Rabbit argue proclaiming their discernment, and Piglet’s the worrywart, Tigger’s a bouncy livewire, Eeyore’s gloomy and insecure, Kanga is motherly to her sweet son Roo, while Pooh’s dipping into the honey pot. 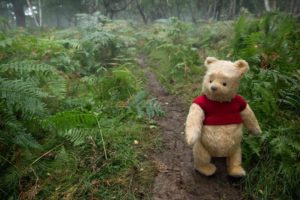 They say you can’t judge a book by its cover and certainly in this case you shouldn’t judge a movie by its trailer. Seeing only a ‘glimpse’ of the live action magical stuffed animals does not do justice to their personalities. Each is impressively realistic in the film, their gestures, actions, and specifically, their speaking is literally jaw-dropping. Jim Cummings provides the familiar and comforting voice of Pooh we’ve seen in Disney videos, movies and promotions for the last 30 years. He’s a standout in the film as he also voices gloomy Eeyore.

Boasting the strong writing team of Alex Ross Perry “Listen Up Philip,” Tom McCarthy ‘Spotlight” and Allison Schroeder “Hidden Figures,” with acclaimed director Marc Forester of “Finding Neverland,” “The Kite Runner,” and “Quantum of Solace”— we’re the benefactors of a lovely,  ‘sweet as honey’ relatable and timeless cautionary tale. My point of contention is the two hour run time, much too long for children.

In rapid succession, we view Christopher Robin’s life advancing until settling on his current high-pressure business job in London. A fantastic Ewan McGregor stars as Christopher Robin, a disillusioned workaholic—his wife a very worried Evelyn (Hayley Atwell) and his bright, yet neglected nine-year-old daughter Madeline (Bronte Carmichael) all live in London. Yep, it appears that Mr. Robin has lost his smile, laughter, and sense of wonder. Evelyn and Madeline both view him as stressed out and distant.

Pooh, has lost his friends and by searching for them he ends up in a park in London, he has a cute-meet with Christopher Robin on a park bench. Let the constant questioning begin! It’s clear from the get-go that Pooh has a one-track mind, he has missed his friend and wants to help. He senses the discontent, and like a broken record continues his message until Christopher Robin loses his temper.

Considering the natural forest setting of the books, the simple stories of day-to-day play, the message of kindness and goodwill—the film shifts quickly to the forest, immersing us into that innocent, childlike world of furry friends.  Ultimately, the books are for children, yet their messages are for all. And that is precisely why Winnie the Pooh and his friends are so popular. Who doesn’t need a good old bear hug now and then? In one of the sweetest scenes in the film, Pooh and Christopher Robin are merely sitting on a log hugging each other. Yes, they got this one right. 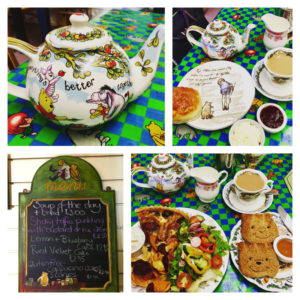 * Author’s note: I visited Pooh Corner in East Sussex, England in September of 2017 by taking a train from London to Hartfield and then a taxi to Ashdown Forrest. There’s a delightful tearoom with an outside dining area and a shop filled with Winnie the Pooh memorabilia. Julie Ashby and her sister run the shop, and they gave me a map of the woods. I talked with them, and they did tell me that, as a child, Christopher Robin came into the shop with his nanny for sweets. Unfortunately, the woods were muddy that day, but I intend to go back in September to see Pooh Bridge and play “Pooh Sticks.” Stay tuned!