Check out the gala event live on the CW network Sunday, January 12, 2020, from the Barker Hangar in Santa Monica. Stay tuned as I’ll be reporting from the Red Carpet for RogerEbert.com before the show.

The Critics Choice Association (CCA) announced that film icon Eddie Murphy will receive the Lifetime Achievement Award at the 25th Annual Critics’ Choice Awards. Murphy will be feted for his extraordinary roles over the years, most recently his brilliant portrayal of the legendary Rudy Ray Moore in Netflix’s Dolemite Is My Name, for which he is nominated for Best Actor.

The star-studded gala will once again be hosted by film, television, and stage star Taye Diggs, and broadcast live on The CW Television Network on Sunday, January 12, from 7:00 – 10:00 p.m. ET (delayed PT).

Eddie Murphy is the most commercially successful African American actor in the history of the motion picture business and is one of the industry’s top-five box-office performers overall. Murphy is on the very short list of actors who have starred in multiple $100 million pictures over the past three decades, from Beverly Hills Cop to Daddy Day Care. Some of his other most beloved hits include 48 Hours, Trading Places, Coming to America, Harlem Nights, The Distinguished Gentleman, Bowfinger, The Nutty Professor and Shrek.

Murphy can currently be seen portraying the legendary underground comic personality Rudy Ray Moore in Dolemite Is My Name from Netflix and recently wrapped production on Coming 2 America, the long- anticipated sequel to the 1988 box office hit.

In 2007, Murphy received critical acclaim for his portrayal of James “Thunder” Early in the DreamWorks film Dreamgirls, a performance which would garner him the Critics’ Choice Award for Best Supporting Actor as well as earning him his first Academy Award® nomination in the same category.

In addition, Kristen Bell will receive the fourth annual #SeeHer Award during the ceremony.

The #SeeHer Award recognizes a woman who embodies the values set forth by the SeeHer movement, to push boundaries on changing stereotypes and acknowledge the importance of authentic portrayals of women across the entertainment landscape. SeeHer is the leading global movement for accurate portrayals of women and girls in media. Led by the Association of National Advertisers (ANA), SeeHer is a collective of leading marketers committed to creating advertising and supporting content that portrays women and girls as they really are. Previous award recipients are Viola Davis, Gal Gadot, and Claire Foy.

Kristen Bell currently stars in the NBC series The Good Place, opposite Ted Danson, and was recently seen reprising her role as the titular character in the revival of the popular series Veronica Mars, on Hulu. She can currently be seen in the box office smash Frozen 2 reprising her role as Anna. Additionally, Bell serves as executive producer and appears in the second season of Encore, on Disney+. 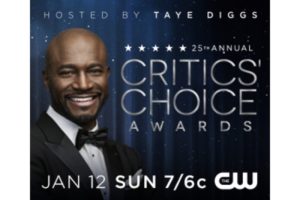 Critics’ Choice Awards are bestowed annually to honor the finest in cinematic and television achievement.