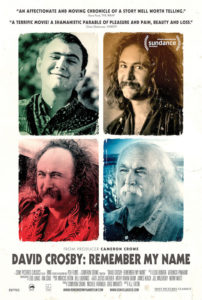 David Crosby Speaks from the Heart

Talk about up close and personal! David Crosby, the songwriter, singer, and guitar player of the Byrds and Crosby, Stills, Nash, and Young at 76 years old talks openly reflects.

Cosby narrates the film and is brutally honest on his regrets, cocaine and heroin drug use, his fears, his belief in family and his intense need to perform.

Unfortunately, the band members Stills, Nash and Young haven’t talked to him in two years; he says he’s very sorry about the situation and emphasizes that it’s his entire fault.

Cameron Crowe serves as producer, and A.J. Eaton is the director of the documentary. They’ve adopted a parallel, laid-back tone, as their star speaks in an informal matter often going off on a tangent or ignoring prompts for answers.

When given the choice of a content home life or performing he says, he’d choose to play music as it’s the only thing that makes him feel alive.

The film provides a snapshot of David Crosby, that would otherwise be unknown, watching him relive his past is mesmerizing; clearly, his facial expressions and blunt answers “all speak for themselves.” He’s in the driver’s seat, telling his tale his way.

A bonus occurs when he revisits Joni Mitchell’s former home (where they both lived), that was the inspiration for the “Crosby, Stills, and Nash” song “Our House.” One of my favorite moments in the film.