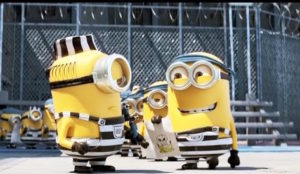 Where Are the Minions? So Sad, Not Much Screen Time, Only Jail Time

The film starts with an angry, downer tone. Both Gru and Lucy are fired by a weird woman that screams at them and kicks them both out of the company.

Soon Gru is reunited with his twin brother Dru, who wants to learn how to be a criminal. Together they ultimately go up against a wacky 80s villain named Balthazar Bratt. The minions are sent to jail and aren’t in the film with Gru for at least 50 minutes.

Is jail time an appropriate storyline for a kid’s movie? Especially if the prisoners are the beloved, yellow Twinkie-shaped fun-loving Minions; I don’t think so.

All voice cast is back as well as the director with the addition of two more directors.

Could the trouble actually be that three directors were involved with this remake, all with separate agendas? Who knows?