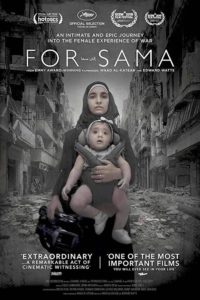 “For Sama” has been championed as, “One of the most important films you’ll ever see in your life.” At the age of 21, Wadd al-Khateab, a college student in Aleppo, began filming the uprising in Syria. She continued filming for five years, capturing over 500 hours of film. “For Sama” is a love letter to her daughter Sama, a record of war conditions that presents Waad and husband Dr. Hamza al-Khateab’s reasons for staying in Aleppo until the end. My in interviews with Waad, Hamza and co-director Edward Watts were conducted by phone July 23, 2019. 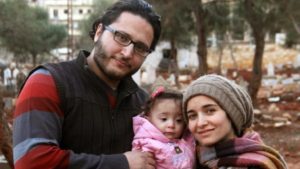 SARAH KNIGHT ADAMSON: I want to thank you Waad and Hamza for your bravery in letting the world see your war story, it’s my honor to speak with you today. I’d like to ask Waad about her intentions at the beginning of the filming; did you ever think you would try to turn the footage into a documentary film?

WAAD AL-KHATEAB: No, I didn’t start out with that intention, I just kept filming and was hoping that one day someone would do something important with it, but I didn’t expect this.

SKA: What were some of the challenges during your filming?

WA_K: There were so many, but I think the constant attack was the most difficult to endure, the constant gunfire or blasting missile noise would interrupt a normal day that I was trying to film. The horror I saw was difficult, but I knew I had to continue and to look for hope and just kept filming even though it was difficult. Many times my camera was upside down from the attacks.

SKA: Dr. Hamza, near the end, you were the last hospital in Aleppo, can you tell us how many surgeries that were performed at the hospital during those last 20 days?

H-AK: I believe the number was around 865, we were the only hospital left.

SKA: Does that fact that you helped so many people and saved so many lives make your stand worthwhile or do you ever regret staying now that you are removed from a war situation?

H-AK: I swear, never, because I was given an opportunity of a lifetime, for example the baby that was born in the film, [I told Dr. Hamza that I began to cry during this scene in which he brings a baby to life.] He continued, “That life would not be here, there are so many other examples and miracles that happened, even more, that aren’t in the film. The thank you from a mother or a child after we got back of someone we helped will last a lifetime for me. I will never regret staying.”

SKA: Edward, could you tell us how you got involved with Waad and the film?

EDWARD WATTS (Co-director): We met after Waad left Aleppo when a British film company introduced us, she had incredible war footage of her last five years, almost 500 hours of film. The film company called me because they knew I would care about what happened in Syria.

SKA: Waad, can you tell us about Sama today, how old is she? What does she like to do?

WA_K: She’s 3 ½ She speaks a mix between English and Arabic, she likes to play with Taima, her sister.

SKA: Dr. Hamza, can you talk about the Syrian and Russians violation of the Geneva Conventions in launching airstrikes on medical facilities?

H-AK: I’m not surprised by the hospital bombings; what I’m upset about is the world just watching and doing nothing.

SKA: Dr. Hamza, do you or any of the family have nightmares or problems with the war conditions you lived under for five years?

H-AK: For me, no, I don’t have them even in Aleppo, or after it’s part of my profession to see people in an emergency situation, so no I haven’t had any nightmares. Waad, has had nightmares even in Aleppo, and she’s had them since; so has Sama. In fact, Sama would wake up in the middle of the night just screaming and crying, but they are less now. 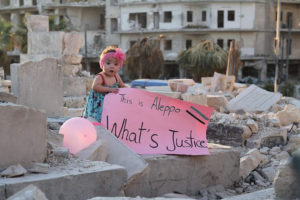 SKA: Edward, Why is this film such an important war documentary?

EW: It’s a very unusual war documentary the first of its kind about a female experience and understanding of what war means. It’s not only about the fighting and bombing, but it’s also about how people get on with their daily lives; and put food on the family table in the evening, at the end of a day. It’s a testament to all of our humanity, because you get the sense of the best part of how people survive in this horrendous situation, and that there’s still a sense of community even under intense bombardment. It’s probably one of the most truthful war documentaries that I’ve ever seen because it captures the full spectrum of human experience, not just the darkness.

SKA: Edward, what impressed you the most in Waad’s filmmaking and footage?

EW: It’s the most extraordinary archive I’ve ever come across, because she has an incredible eye for human beings, just the emotional heart, for example, the three brothers scene, I’ve seen it thousands of time, but I still tear up; she managed to contain the emotional instinct of what was in front of her. She displayed incredible courage, to continue filming under those horrendous conditions; what we don’t see is that they haven’t eaten for three days or slept for four days. And yet she’s still in the thick of things and capturing these beautiful moments of humanity.