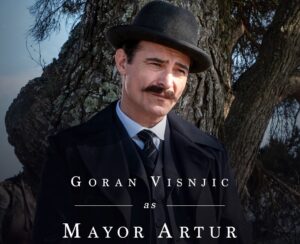 Sarah Knight Adamson interviews Goran Visnjic the Mayor of Fatima in the film “Fatima.”Goran was speaking to me from Croatia  where he is visiting his parents. The setting is 1917, in Fátima, Portugal, where a miracle is said to have happened, an apparition of the Virgin Mary visited three small children. “Fatima” is based on true events during war-time in Portugal, according to those who witnessed the events—the children, their families, the villagers, and others who flocked to the town. Director Marco Pontecorvo beautifully and historically re-creates the story with Picturehouse Studios as the film’s distributor.

Goran  talks about his ER days, George Clooney, his HUGE mustache in “Fatima,” and the makeup process. I worked the last episode in Chicago with John Stamos in 2008. Goran is from Croatia; although he’s lived in LA for 21 years, he talked about his past movies, upcoming films, and all the things he loves about Chicago.