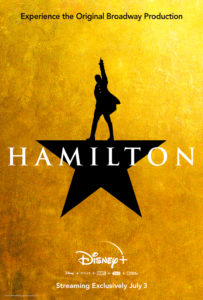 The movie version of “Hamilton” brings the theater musical to worldwide audiences—revolutionary in style, concept, and imagination— Lin-Manuel Miranda’s Broadway hit lands at a perfect time. Across the globe, the pandemic has halted our lifestyle, causing financial debt to many and multitudes of deaths. The Black Lives Matter movement is now at a tipping point where Americans have had enough of our police brutality. “Hamilton” is a refreshing intermission of our world at the moment—electrifying and ingenious, brilliant, and exhilarating— a joyous celebration of our nation’s history, seen through a vision of untraditional casting.

For starters, the musical brings us all back to our school history lessons, while presenting characters of different ethnicities, focusing on a lesser-known political figure during the Revolutionary War, Alexander Hamilton. Writer Lin-Manuel Miranda plays Hamilton with profound intensity, and with good reason. As the film’s focal point, his character in the 1700s has the deck stacked against him as an immigrant orphan, with an abandoned, improvised childhood—how does someone like himself, especially an immigrant garner a place in American history? Miranda has much to say as he interacts with his rival Aaron Burr, played incredibly by Leslie Odom Jr., at first, they are friends. Ambition ignites their ultimate famous pistol duel in which Hamilton is mainly known for not surviving in 1804.

Having seen the play in London, in October 2019, at the Victoria Place Theater, I had a great seat, seventh-row center, and enjoyed the experience of sitting with an audience. The part of King George, played by Jonathan Groff in the film, is particularly interesting viewing, especially with a British audience. As the cynic, he whispers to the audience and rolls his eyes; the humor is welcome in a story that deals with such heavy topics of war, death, and infidelity.

While viewing the play, I recalled my ancestor, a Patriot of the Revolutionary War, Barnabas Cole, who served under General George Washington. An eerie feeling came over me during the play; I became immersed in the characters and their part in our country’s founding. The film has the same infectious feel, almost baiting you to learn more about our country’s heritage. The rap style provides the cadence, the succinct importance, and the underlying nuanced tone of the production. As Miranda stated in the press notes, “This is the best-rehearsed movie in the history of movies, as each performer has performed their role hundreds of times. No one has had this seat in the house…it is better than the best seat in the house.” He also said, “I’m incredibly grateful that the world will be able to see this. Theater is a communal artistic experience, and this film is a love letter to live theater.”

Thomas Kail serves as the director as he did for the theater productions. Two actual performances were shot in full with an audience toward the end of the original cast’s run at New York’s Richard Rodgers Theatre in June 2016, using multiple cameras. There were six camera positions with six camera operators and three fixed camera positions, one dolly and a Steadicam, a crane, and two angles capturing each performance. One overhead camera and one camera at the rear of the stage was strategically hidden in a brick wall. The overhead shot is one that I distinctly recall; there’s no way a theater viewer would be able to see that shot or many other angles that the camera’s provided. Also, 13 songs were filmed between shows, allowing for Steadicam, crane, and dolly-mounted cameras to move among the performers without interference from the audience. Kail said in the press notes, “It is a cinematic piece of art that recreates the energy and the sense of community the original production provided.”

The talented Daveed Diggs, as the Marquis de Lafayette, one of two characters, along with Thomas Jefferson, is mesmerizing in his roles. In addition, Hamilton’s sister-in-law, Angelica Schuyler’s, role is wide-reaching. Renée Elise Goldsberry won a Tony for Best Featured Actress for her portrayal of Schuyler.  The cast Tony awards also included Best Featured Actor Daveed Diggs, for his dual roles of Marquis de Lafayette and Thomas Jefferson, Leading Actor Leslie Odom Jr. for his role as Aaron Burr, and Best Direction, Thomas Kail.

Miranda, who wrote the book, music, and lyrics, brings stylistic energy that draws from unlikely contradictions, from Rodgers and Hammerstein, the Notorious B.I.G., Gilbert and Sullivan, Destiny’s Child, including rap, rock, jazz and traditional show tunes. The spectacle of “Hamilton” is an all-American patriotic show of a modern-day, musically diverse nation. Drawn from author Ron Chernow’s 2004 biography of Hamilton, Miranda reimaged the characters to incorporate immigration.

For sure, “Hamilton” is not the same as seeing a Broadway musical performed live in a packed theater. Yes, you’ll hear applause and see the audience, yet it’s not the same being seated during a live performance. Nor should we grieve the loss of theater-going. Disney Plus opened the film early to give us an apropos July 4, and summer. “Hamilton” was scheduled to open October 2021, by opening early, America and the world can celebrate a wonderous patriotic blockbuster of a musical now. I look forward to theaters and Broadway opening when it is deemed safe.