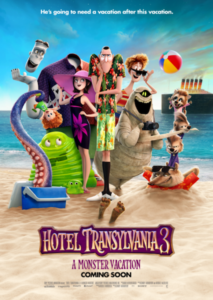 As a relentless advocate for quality children’s films, the Hotel Transylvania animated series (2012, 2015) has never been high on my list—especially now that the bar’s finally been raised—sadly the third 2018 installment is a step backward. Given today’s atmosphere of excellent scripts for children’s’ films, it’s mystifying as to why this dreadful film came to fruition. One would assume the children’s film genre ‘success formula’ would at least be studied closer—gone are the days of using mindless inappropriate cinema as babysitters.

Hotel Transylvania: Summer Vacation starts with the same point of contention I had with the first film—parents’ lying to their children. Count Dracula (voiced by Adam Sandler) blatantly lies several times to his teen daughter (a half human/ half vampire) Mavis (Selena Gomez) in the first film, and the thread continued in the third. He actually says at the beginning of the new film, “I’ve got to stop lying to my daughter.” Here’s my question, “What exactly are children learning from this plot point?” And, what is the point of the lying—is it to garner cheap laughs? Probably.

Summer Vacation begins at Count Dracula’s (Drac) ‘monsters only’ hotel that he built to shelter his daughter from humans. Here’s the story progression; Drac shields Mavis from humans as her mother was killed by a village torch mob similar to the one in the classic Dracula tales, a free-spirited backpacking teen human Jonathan (Andy Samberg) stumbles upon the hotel, Mavis instantly falls for him or “zings” (an invented term in the Hotel Transylvania series to mean love-at-first-sight)—against her father’s wishes, they marry and have a son.

The third film starts a few months after the second as Mavis presents the idea to her father of ‘getting away’ and going on a much-needed vacation and before you can say Bermuda Triangle, all are flying on ‘Gremlin Air’ complete with green sharp-toothed gremlins sporting bad behavior as gags. Yep, they throw luggage out the windows, spill hot coffee in passengers’ laps, and the worst offense the captain announces, “We have begun our descent, you can unbuckle your seat belts and feel free to move about the cabin.” All of these jokes fell flat in my screening, no kids or parents were laughing—I was cringing.

Genndy Tartakovsky directs as he did the first two unbearable Hotel Transylvania films, here he has writing credit with Michael McCullers. Aside from the ending narrative that provides compassion for monsters by emphasizing the point that all creatures have different parts, but we are all the same as a whole, and the line, “Gotta be greater than haters,” the majority of the script is bland, incongruous and senseless. Note to parents and grandparents—a few solid lines at the end of an overly problematic film are not enough to save it—especially since we’ve been drowning in mediocrity from the start.

The plot centers on a luxury ‘monster’s only’ cruise ship, a human ship’s captain Ericka Van Helsing—hmm does that name ring a bell—she’s the great-granddaughter of Professor Abraham Van Helsing MD, the vampire hunter, and archenemy of Drac from the 1897 horror novel Dracula. Ericka’s sheltered life is comparable to Mavis; she lives aboard the ship with her great-grandfather who taught her to hate monsters and to hunt and kill Drac.

From the get-go Ericka is sugary sweet to Drac, thus “zinging” occurs on Drac’s end leaving Ericka with conflicted feelings. Her main action is to kill Drac; we are subjected to flare guns, knives, and a cadre of methods—again, inappropriate in a children’s film. After Ericka’s failed attempts, the main villain of the film takes over—a technology stitched-together Abraham Van Helsing. He enlists the help of a giant, frightening sea monster who is controlled by music.

To be vague here, we have a DJ duel, with Jonathon pitted against Van Helsing, with loud house music blaring as a prequel to the battle, amongst frenzied strobe and neon lights, devoid of any smart dialogue. In short, a mash-up scene that’s not kid friendly. To my knowledge, kids don’t seek out the genre of monotonous beats of wordless ‘house music.’ Although, to its credit, the DJ battle songs, “Good Vibrations,” “Don’t Worry Be Happy” and “Los del Rio Macarena” songs are great fun, but can’t carry the film.

The Bottom Line: Kids and parents deserve quality films—given this is the third strike—Hotel Transylvania is out.