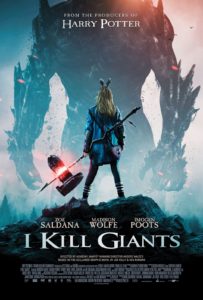 I Kill Giants is based on the graphic comic book series of the same name written in 2008 by the famous comic book writer Joe Kelly, of Deadpool, and Uncanny X-Men fame with artist J. M. Ken Niimura. Danish filmmaker Anders Walter directs in his debut feature. If you’ve read all seven issues of the graphic novels, it would seem conceivable to adapt the book into a feature film, as the work is astonishing. The undertaking would be no easy feat – as the casting, as well as the narrative for the main star absolutely, has to be spot on. Here, the casting of the pre-teen is perfect. 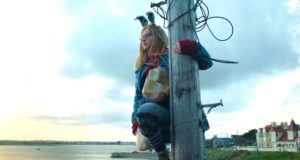 If you take away anything from this review, know that Madison Wolfe who plays Barbara a 12-year old troubled middle school girl, is outstanding in the role. What I found distracting to the core themes of the film which are trauma, mental illness, and recovery; was the violence of the repeated bullying; we’re talking fist punches to the face, knock down drag out fighting. Also, the vulgar dialogue that appears in the novels as well as the film that serve little purpose in moving the story forward, and generate a creepy tone. An example is Karen (Imogen Poots) the older sister yelling at her brother after she’s finished serving he and his friends’ dinner, “ Dave, I busted my ass on that.” Dave, “Yeah, it smells like you put your ass in that!” This scene is near the beginning of the book and the film; we are scratching our heads wondering where in the world are their parents. Regrettably, we don’t find out until two-thirds of the film is over. Which, by the way is another problem in the script.

So where do the giants come into play? They are in a magical-realist world as Barbara retreats deeper and deeper into an emotionally distressed state. Similar in theme to A Monster Calls (2016). We view them in plain sight, they communicate with Barbara, and she tries her best to handle her demons, on her own. The monsters become the center of Barbara’s life, yep, all-consuming. Kelly doesn’t want us to know the trauma until much later in the story−I will not ruin the surprise− so no revel here.

As Barbara spirals down into her own world of trapping and fighting monsters, the school psychologist begins working with her; Mrs. Mollé (Zoe Saldana), she’s a new mom with late nights, thus her tired, no-make-up appearance. Her scenes with Barbara are some of the best in the film, her patience, kindness, second chances and the fact that she genuinely cares resonant while giving us hope that she will come back to her normal self. Barbara’s only friend is Sophia (Sydney Wade), the new girl in school, she indulges Barbara’s bizarre fixations as a friend would, but when they become too strange, (gathering dead animals), she pulls back. 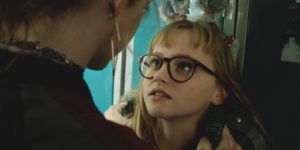 The film does feel stretched out in scenes especially between Barbara and the monsters. At times she is honestly terrified. It’s not an easy film to view; I do think viewers may be lost if they haven’t read the book series. Fans of the series will probably enjoy the film, yet most who have not read the books will be in the dark. It’s too bad we can’t talk about the actual trauma, as then perhaps I could make specific recommendations for the film. The ending did bring me to tears, it’s very well done, and that’s due to a 15-year-old teen named Madison Wolfe-who knows how to play combative, lovable, brave, and frightened with intelligence that radiates confidence. Bravo!

The Bottom Line? As a parent, I’d view the film first and then with your middle school age child or older teen at home so you could discuss the themes while answering questions.