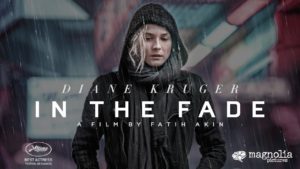 The reason to see In the Fade is due to German-born Diane Kruger’s outstanding  performance as a grieving wife and mother. She’s previously acted exclusively in English and French films – most notably Quentin Tarantino’s Inglorious Bastards. Here she convincingly portrays Katja’s fragility, anguish and unrelenting determination to seek justice for the terrorism act that killed her husband and 6-year-old son. She won the best-actress prize at Cannes for her outstanding performance, and the film also won a Golden Globe.

As a courtroom thriller, In the Fade delivers. We are shown that stereotyping is dangerous thus causing a downward path to acts of vengeance. Director Fatih Akin takes us on an emotionally affecting journey into the dark world of senseless terrorism, and it’s consequences. We view Katja’s pain and suffering to the degree she’s trapped with no recourse but to take the law into her own hands. But, then again perhaps she makes another turn. The best way to truly know the outcome is the view the film as it unfolds.

Akin’s film is rich in character development; he introduces us to Nuri (Numan Acar) Katja’s husband and his wife, Katja Kruger. We see them being happily married, as he steps out of a prison cell for the event. Fast forward years later as the blissful family of now, three goes about their daily routine. Katja is a loving mother to her son Rocco, dad Nuri has stepped up and has a legit job–despite his shady past as a drug dealer.

Akin’s 2004 breakout film, Head-on also speaks to the desperation of a female protagonist centering on culture conflicts in Germany. As a filmmaker, here he drew on his own experiences growing up in Hamburg, Germany, the son of Turkish immigrants. It’s a highly personal film for Akin, as it’s based on the National Socialist Underground, a right-wing terrorist group who murdered nine people of Turkish, Greek and Kurdish origin as well as a German policewoman; Akin remembers these incidents all too well as his brother knew one of the victims.

Akin shares his reasoning for the film and is quoted as saying, “I was inspired by the NSU murders in 2011. The German Neo-Nazi group National Socialist Underground (National- sozialistischer Untergrund) perpetrated a series of xenophobe murders between 2000 and 2007 throughout Germany. It was shocking for me as I’m of Turkish background. My brother was acquainted with someone who was killed from Hamburg. The big scandal was that the police focused their investigation on people within the community of the victims, blaming drug or gambling connections. Police pressure was so intense that even the press and the community themselves began to have similar suspicions.” This is true to the narrative of the film and sheds light on why the trials were so unfair.

Akin also spoke to the topic of revenge by saying, “I started researching the concept of revenge. Does it really exist? Who would actually seek vengeance? Would I take revenge? Katja has her own morality, her own definition of justice. In that way, Katja embodies something dormant inside of us that should always remain dormant. I was not interested in the murderers’ perspectives. I was very clear about where my empathy, my focus, had to be. In the Fade became a very personal film for me. Although she’s a blond and blue-eyed German woman, the character of Katja is my alter ego. This film is about that universal feeling of grief and its many layers.”

I was intrigued as I read Akin’s thoughts on revenge because the film does wrestle with that issue. It certainly made me wonder if I was capable of such a thing if I were in Katja’s shoes. The film is thought-provoking and sheds light on the NSU murders in 2011. I can highly recommend this film.