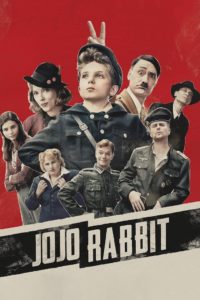 “Jojo Rabbit” is an anti-hate satire by writer and director Taika Waititi.  It’s the story of a lonely German boy during WWII played by Roman Griffin Davis as Jojo, he’s a member of the Hitler youth, although his parents are members of the resistance. His world view is turned upside down when he discovers his mother (Scarlett Johansson) is hiding a young Jewish girl in their attic.

The film is based on the book, “Caging Skies,” although here’s a case where the movie is better than the book. The novel paints a much darker picture of Jojo, lacks the comedic tone and is mean-spirited.

During Jojo’s Hitler youth training he got his name by refusing to kill a bunny in the forest during his Hitler camp exercises.

I applaud Taika Waititi  as he created something very new, fresh and different with his film. “Jojo Rabbit” is a reminder that we shouldn’t be quick to make judgements and that we should follow our hearts and do what is right. The comedic aspects are hysterical, I laughed from start to finish!

I screed this film at the Toronto International Film Festival #TIFF.

Here’s the link to the podcast on Hollywood 360 Radio Network: