The Memphis Film Prize is a uniquely creative showcase for emerging talent. Filmmakers from across the country submit their short film — between five and fifteen minutes long — for a cash prize of $10,000. The main requirement is that the films must be shot in Shelby County, Tennessee. Ten films that have been selected for the competition are then screened for audiences and judges in August, and a winner is chosen. Incidentally, the cash prize is unencumbered, with no restrictions on the money. The goal of the festival is to compensate creativity, and allow filmmakers to do what they need to in order to keep their creative work moving forward.

Now in it’s fourth consecutive year, the Memphis Film Prize continues to grow annually in attendance. Additionally, submissions for this year’s festival were double the number of those entered for last year’s competition.

ORIGINS, LEADERSHIP AND CONCERNS FOR PARITY

In 2012 filmmaker, writer Gregory Kallenberg founded the Louisiana Film Prize, held in Shreveport, Louisiana. After its success and growth, he founded the Memphis Film Prize in 2015, He now serves as Executive Director of both festivals.

Because of current industry focus on parity and inclusion, I asked Kallenberg whether considerations of gender and ethnic diversity of the director, writer, or cast play a role in the selection of the competing ten films. “The decision lies solely in the hands of the judges, and, from what I can tell, is usually made from the work itself. The judges get no info on the filmmaker, Kallenberg said. ‘Here’s what’s interesting: for some reason, the female filmmaker participation rate is much higher in Louisiana. That said, in Memphis, with much lower participation of female filmmakers, women have won the big prize twice and never in Louisiana.”

Judging the Film Prize competition is handled differently than judging at other festivals. Instead of convening to collectively decide a winner, judges vote individually. The judges’ votes account for 50% of the vote and audience determines the remaining half. Official judges and audience members are required to see all ten films in competition before being permitted to vote.

As a juror, my directive was to interact intensively with the filmmakers and the cast members at numerous networking events that facilitated friendly, creative conversation about the industry, career building and paths to success, and offered an opportunity for everyone to share information and expertise. Kallenberg set the tone for each event, pumping up the group camaraderie by inviting filmmakers, cast and jury members to shout out, “We are the Prize.” 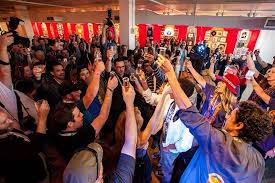 Public Relations Director John Wildman reminded all of us about the Memphis Film Prize’s unique characteristics. “The film competition hybrid aspect is rare,” he said, “However, as someone that works on behalf of many film festivals across the country, covers others as a press member, and has had films at others too, I can say that the Memphis Film Prize makes a unique, concrete effort to truly benefit filmmakers. Delivering a big check is a big deal. Furthermore, the mentoring from the judges, grooming from the Film Prize staff, and being able to guarantee a thousand plus people to sit in an audience to watch your short film is amazing.”

The three panel discussions, tailored to support filmmakers, put the judges on the spot to share their expertise about producing and marketing films:

How Do I Build My Brand (and Career) As A Filmmaker? Panel

▪ Description: Now that the Internet has destroyed print media and no one writes about anything unless it’s part of the Marvel Cinematic Universe or has a major movie star and a studio pushing it, how does an independent filmmaker get any press these days? Other than access to parties and people not related to you getting to see your film on a big screen, what can you get out of being at a film festival? What gets a journalist’s attention? And should you even be concerned with getting a journalist’s attention or just self promote via social media exclusively?

▪ Our AWFJ panel suggested: Put together an email package with three photos (medium res) with captions, a 30-second video clip, and a trailer if possible. Make sure your present the package and other collateral with sufficient lead-time. Set specific goals and start early to find opportunities to realize those goals. Build upon opportunities. Get involved in your local community, volunteer, and establish yourself as a filmmaker. Focus on your social media and work on that daily until you are satisfied with the results.

Show Me The Money Panel

Gregory Kallenberg Moderator – Kevin Arbouet, Milan Chakraborty, Melodie Sisk
▪ Description: Our veteran indie film producers and filmmakers will answer questions all connected to the biggest question: How do I get the money to make my feature film? If you don’t have a rich uncle or a dentist that always wanted to be in the film business, where does the money come from? If you haven’t built a Facebook, Instagram, or Twitter following numbering the tens of thousands eager to invest in the crowd-funding campaign for your feature film, then what do you do? What are the avenues to acquire the financing these days? And while we are talking about money, how do you actually sustain a life while you are making just enough money to get the film made but not actually pay your rent? Everything Changes: How Much of this Stuff is True Anymore?

▪ Description: Old moviemaking wives tales are still out there, but what has legitimately changed when it comes to what used to be accepted as gospel? Can short films be utilized as “calling cards” any more? What about creating a visual presentation deck to pitch your film – is that still a thing? By this point is a distributor necessary or even practical when getting your film on VOD platforms is your only real option for a release? What about Sundance and SXSW – the only way to get your film in is if you have a Sundance or SXSW alumni connected with your film, right? And if your film doesn’t get in there then it will never make any money, right? And no one reads a script unless a major movie star is attached, right? Who even reads scripts now? There are more questions like this, and we’ll get to as many as we can.

AND, THE MEMPHIS FILM PRIZE GOES TO…

The winner of the 4th annual Memphis Film Prize was announced during a brunch at Aldo’s Pizza Pies in Memphis (100 S. Main Street) on Sunday, August 4th. Film Prize’s coveted top award of $10,000 cash – determined by the festival audience and film judges – went to A Night Out, directed by Abby Meyers and Kevin Brooks. According to A Night Out co-director Abby Meyers, “The film’s story is based upon my personal experience as a victim of sexual assault, we [Kevin Brooks] wanted to tell a real story through a victim’s eyes.” Powerful indeed, A Night Out is a tense and vital account of violence against women that calls for and deserves attention.

What were some of the festival’s most satisfying moments? John Wildman’s comments resonate: “It’s great to witness the remarkable supportive friendship and respect that develops among the competing filmmakers. Seeing a number of crew and cast members work on multiple projects that make it to the finalists’ stage adds adds to that, but it is also fostered and encouraged by everyone associated with Film Prize, from Gregory Kallenberg to the newest volunteer. Seeing that in action is always my favorite part.”

Wildman also says the event’s unique connection to the community — to Memphis and Shelby County — is especially gratifying. “To make a film, you need to look at everything as though it serves a purpose to tell a story or to serve as a setting for the story told. When you watch the Film Prize films, you often are seeing many different locations and “sides” of Memphis and Shelby County. As an outsider, I recognize some, and many I do not. BUT – I cannot help but get the flavor of the area, I can’t escape the influence it has on the people making those films and the satisfaction they — and the event — have in giving back.

Looking back over the years since he founded the Memphis Film Prize, Kallenberg recalls, “My greatest joy has been helping to build communities of creative entrepreneurs. I’d witnessed Austin’s growth through creative industry, and it was pretty thrilling to play a role in it. My goal is to do this in as many communities as I possibly can (and still retain the purity of our mission). Aside from that, I’m unpaid, but wonderfully content.”

Looking forward to next year’s Film Prize, and wondering when another creative community will be added to Kallenberg’s roster. 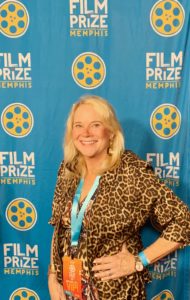