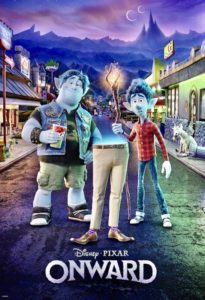 Disney/Pixar” s animation and fantasy film “Onward” takes place in a suburban fantasy world. Two teenage elf brothers Ian, aged 16 voiced by Tom Holland of “Spiderman” fame, and his older brother Barley voiced by Chris Pratt of “Guardians of the Galaxy” fame. When Ian was only one year old, his dad passed away. Although, unbeknownst to the brothers, dad set up a magical journey in the future so they would all be united together for one just one day.

The story is inspired by Director Dan Scanlon, whose father passed away when he was only one year old.

The Bottomline: I’m in 3 stars out of 4, Typically with Pixar, you can’t go wrong, and that’s the case here. This is a heartwarming, magical story between brothers who long to see their dad and spend some time with him. The underlying theme is the discovery of true brotherly friendship, love and support. I would recommend the film to all age levels as the themes are universal. Check it out, as it’s now streaming online.