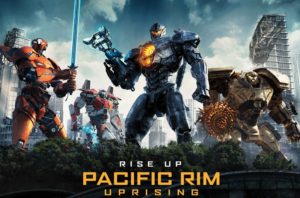 The sequel to Pacific Rim continues the ten years after the setting of the original film, the year is now 2035 in a science fiction world where monsters are at war with earth. These monsters named giant Kaiju’s are aliens that arrived via a breach in the Pacific Rim. They are unstoppable with the established weaponry. Only giant robotic warriors called Jaegers—piloted by humans connected, typically as a duo, as their minds are drifted together to double the strength and operate the Jaegers from within.

So, should you go and see it? In my opinion, I’d wait for the DVD or streaming format. In full disclosure, I was very excited about the first film—giving it a glowing review. The creative world of Kaiju’s and Jaegers was epic. The original ideas presented were thought provoking especially when it came to big screen action. “Pacific Rim: Uprising” lacks the newness factor, the wow factor, and the engaging storyline factor. Its tone is more of a ‘Transformers’ film, (loud, crunchy, whip-lash filming, somewhat teen-centered and wait, let’s not forget those continued earsplitting explosions.

Clint Eastwood, pilot Nate Lambert is new to the series, one would think he’d co-star next to John Boyega, rebellious Jake Pentecost who’s Colonel Pentacost’s father, Idris Ilba—who died as a hero in the first film. Yes, one would think these two seasoned stars would carry the film. Nope, they are both upstaged by a teen girl; fifteen-year-old hacker Amara Namani (Cailee Spaeny), which isn’t a bad thing given the new contextual elements surrounding the film.

The film does have humorous moments as in the introduction of rebellious Jake’s character; he lives in what looks like a bomb-shelled community in LA. His mansion is falling apart and is missing rooms, with broken windows and doors. He says in voice-over, “I’m not my father’s son, and I’d rather live in half a mansion than a Crappy Apartment, cue the signage for ‘Crappy Apartment’— alongside an apartment building, very funny indeed. When he meets the spunky teen Amara, in a dizzying chase scene, they become allies, and he names her ‘junk-yard baby.’

Jake and Amara both end up as recruits in Jagaer training, along with other teens. Nate and Jake have a history together, which at first appears more like old friends that had a major fight. I did enjoy the banter between them and a hysterical ice cream topping scene. The writers don’t us ask us to care about the trainees as individuals as they don’t give any background information about them, seems that we are to see them as a family unit. This concept didn’t work as it left gaping holes in the plot lines. Too many unanswered questions.

So do the teens save the world? Will you have a headache after viewing the film in 3D? Do Nate and Jake become friends again? Will we meet a ginormous Kaiju that takes us to Mt. Fuji in Japan? Most likely, the answers to all of these questions is a predictable ‘yes,’ particularly if you saw the trailer.

Bottom Line? I’d say wait for the DVD or stream on your own to avoid a major headache.