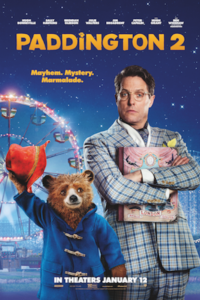 Paddington 2 Teaches Life Lessons: Be Kind, Polite and Look for the Good in Others

Oh, that sweet-natured, adorable Paddington bear is back−here’s the good news−the sequel is better than the original. It’s been three years since Paddington (2015) premiered to fairly good reviews; however, my complaint with the film was the lack of innovative storytelling. Nicole Kidman as the curator of the Natural History Museum plotted to exterminate Paddington by stuffing him as her prize exhibit. Really? Honestly−that plot-line is too morbid for a children’s film.

Paddington (voiced by Ben Whishaw) the Peruvian lovable bear’s follow-up offers a flawless balance of comedy − and creative ‘kid-centered’ storytelling, featuring Brittan’s own suave Hugh Grant as yester-year circus actor Phoenix Buchanan. Director Simon Curtis of Goodbye Christopher Robin specified in our interview this past October while referring to another beloved bear, Winnie the Pooh, “It’s not easy playing opposite children or animals and in this case a cuddly smiley, stuffed bear.” Certainly, the sentiment applies to Hugh Grant and the beloved Paddington however, Grant nearly steals the film. He’s downright fantastic, be sure to stay for the ending credits, as you’ll be entertained by Grant in a musical revenue song and dance number that is sure to garner a smile or chuckle by the mere thought of it.

Paddington 2 felt fun and enjoyable−if not to me at least, a tad surprising. I wasn’t expecting to love the film as much as I did; in my line of work, unfortunately, I’ve become cynical−more often than not, disenchantment is the norm. The mere premise of Paddington’s character, with his very clear set of old-fashioned values he learned from his Aunt Lucy in Peru –he’s always kind and polite, and looks for the good in everyone − is every parents dream in raising their children. These simple, yet powerful lessons should serve as a cue for everyone. At the same time, filmmakers incorporated themes that are close to the source material from which Paddington hails. He was first introduced in Michael Bond’s 1958 book A Bear Called Paddington. Bond wrote more than 20 volumes featuring the blue coat, red hat wearing, marmalade sandwich-loving bear, which have sold over 35 million copies.

The themes here are central to Paddington’s character; he typically gets himself into all kinds of trouble by his innocence. Here he decides to work as a window washer to save money for his Aunt Lucy’s 100th birthday present. One can just imagine the countless jams encounters. The animators must have had a field day, to say the least, and we are the benefactors. Lots of comedic situations with many different types of people.

To recap the plot, Paddington is working to buy his Aunt Lucy a gift and becomes convicted and jailed for a crime he didn’t commit. As a jail-bear for over half of the film, he makes new friends, but unlike the horrid Despicable Me 3 jail scenes, these are actually enduring.

So what’s up with Grant? Well, he spends the majority of the film in various disguises along with personas in attempts to fool Paddington and the police. He’s also on a hunt using an antique pop-up book to find a treasure chest that will land him his fortune−he finds clues near famous attractions in London; Tower Bridge, St. Paul’s Cathedral, Piccadilly Circus, Big Ben, The Houses of Parliament and of course Paddington Station. It’s a brilliant way to teach kids about London, and it’s many historical landmarks.

Bottom-line? The creativity and care with the script set the bar high in exceptional quality for children’s films. The comedy, acting, set design are all outstanding. Hugh Grant just may be nominated when awards season comes around.

Did you know? Principal photography ended on June 27, 2017, and Michael Bond, the creator of Paddington Bear, passed away the exact same day. The movie is dedicated to him.