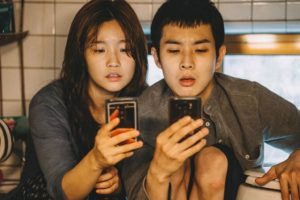 “Parasite” is a South Korean comedy thriller/ horror film, in sub-titles. The world premiere was at the Cannes Film Festival this year, where it won the top prize the Palme d’Or. It was the first Korean film to receive the award with a unanimous vote. It will compete as the Best International Feature Film at the 92nd Academy Awards.

I screened the film in Chapel Hill, North Carolina at FilmFest919 with a packed crowd.

The story is of a family of four living in South Korea that are so poor they fold Pizza boxes to make a living. Suddenly, everything changes when the older son is hired as a tutor to teach a wealthy families’ High School daughter English.

Eventually, all four family members are working in the home, until, a parasite (bad karma) threatens their easy-street plan. Boog Joon-ho directs the film.

The film is sarcastically brilliant, hysterical, clever, and frenzied. The cinematography is glorious! My recommendation is to not read too much about the film; it’s better to view the film without knowing too many details, although I will warn you to be prepared for bloody horror scenes that all lead to a message of hope.

Click here to listen to the Radio Podcast on Hollywood 360 Radio Network: