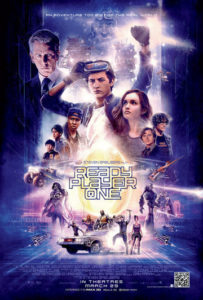 Popcorn Movie is Worth the Price of Admission

Director Steven Spielberg’s latest movie is based on Ernest Cline’s 2011 book of the same name. Centering on a virtual world called ‘Oasis’ gamers spend much of their time due to the harsh everyday reality of a futuristic 2045.

Orphan Wade Watts (Tye Sheridan, Apocalypse 2016) escapes his bleak daily routine by immersing himself in Oasis. He lives in a trailer nearby while his aunt and her abusive boyfriend live a few trailers away.

“Yes, it’s the only place where I feel like I mean anything,” says Sheridan.

With much of the world in dire straights, the majority of humans waste their days in the Oasis. Designed by the late billionaire tech genius James Donovan Halliday (Mark Rylance), who appears in flashbacks wearing an‘Einstein fashioned’ wig. Halliday, a tech genius similar to a Steve Jobs of the future, created simulations in his world where you can fight King Kong, ski pyramids, hang out with Batman, go to a cool disco with a chic, stylish girl, and—better yet—you’ll have impressive dance moves.

Ar3mis (Olivia Cook), is a self-assured pink-haired dare-devil with a need for speed. Wade is enamored for sure, and the feeling appears mutual until the avatars fade and self-doubt sets in. She has a crush on Wade, but is nervous about her looks in real life.

After Halliday’s death, he gave a proclamation to the world. A quest of sorts, to finds three keys that will unlock the end of the game. And—the winner takes all, yes control and ownership of OASIS. So there you have the gist of the movie, Spielberg has been quoted as calling this a movie, as he wants you to sit back and relive the nostalgia of the last 30 years of filmmaking while not focusing on plot or characters. As in, ‘enjoy the ride.’ And what a wild cinematic ride it is!

If you do simply sit back, relax and enjoy this mesmerizing pop culture, CGI world, that’s saturated with so many references it’s impossible to notice them all, a second viewing is certainly in order. You will go down memory lane with so many epic film references such as The Shining, Back to the Future, Jurassic Park and many more. Of course, there are villains, to contend with, yep you guessed it—they are also trying to get those special keys, the result is the kids ban together to battle the corporate suits.

One element I can’t gush enough about is the set design and visual effects; they are brightly colored and eye-popping while sensational. I viewed the film in 3-D and appreciated the layered effects and at times the ‘in your face’ objects. The runtime could have been cut about 15 minutes as certain scenes dragged.

The Bottom Line? If escapism is what you’re looking for in a popcorn movie, then “Ready Player One” is worth the price of admission.