Director Bryce Dallas Howard and her dad, Ron Howard walked the Red Carpet and chatted with press about her directorial debut film, “Dads.”

Bryce Dallas Howard told the audience after an uproarious standing ovation preceding the world premiere of her new documentary film “Dads” at the Toronto International Film Festival—”The film is a celebration of being raised by a fabulous dad and grandfather.” 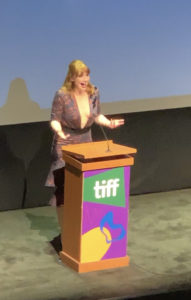 As she continued talking about her dad, actor-turned-director Ron Howard and the support she received from him, Bryce began to tear up and needed a moment to compose herself. In the film, you’ll see several dads tearing up when they start to talk about their children and the impact they have on their lives—including Ron Howard. 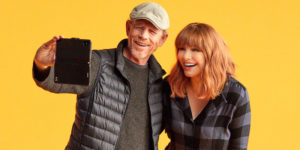 Anecdotes, humor, and wisdom from Hollywood fathers, Will Smith, Jimmy Fallon, Kenan Thompson, Jimmy Kimmel, Ken Jeong, Judd Apatow, and Neil Patrick Harris, along with others answer the question, “What does it mean to be a dad in today’s society?” 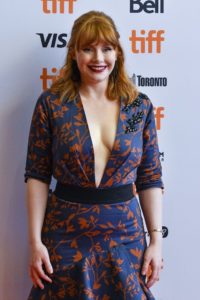 On the Red Carpet, Bryce told reporters, “My dad straight up when I first pitched this, he was like, ‘Not with our family,'” She explained, “When it came to telling a version of my family story — that was something that my dad wasn’t interested in.” However, over time, he began to soften to the idea.

She continued stating that she went behind her father’s back and stole her family’s old home videos. “Yes, I did! I didn’t tell him. My mom was very cool with it because it was very important to me that I got her consent.”

Ron Howard beamed as he made his way down the carpet chatting with reporters, I asked him, “How proud are you tonight of your daughter’s directing debut?”

Ron Howard said, “It’s really amazing. I’m so glad my wife Cheryl could be here as well. You know I feel fortunate that Imagine documentaries had the opportunity to be a part of this project because it’s something that Bryce is really passionate about. This is really her film. So this is honestly an instance where Imagine as a company could simply say, Hey, you’ve got an idea that we understand. We get it. You’re willing to live it for a year. Go get ’em.”

RH: “And there’s been support. But you know, not that much guidance. I’ve been very impressed by her point of view and her vision and the way she’s followed through.

SKA: What has your daughter taught you in life?

RH: That tenacity is pretty interesting to witness. I also had no idea. I’m going back now, you know, 17, 18 years since she began professionally in the business. I honestly am embarrassed to admit it, I didn’t realize how much more difficult the business was for females than males. And to witness it through the eyes of a daughter who’s actually had a lot of good breaks and done incredibly well and still see the ways in which an artist is tested, challenged, as they make their way through the industry. Even without any nightmares or horror stories, but just the struggle. It is profoundly different than what I’ve observed among my counterparts or anything that I felt or really went through.

RH: And so that’s been sobering, but I’ve felt it for years, which is one of the reasons why I’m excited that those ratios are beginning to balance out. That there is a new etiquette and a new understanding of relationships, interactions, in the workplace that make the environment, that do level the playing field a little bit more and make the environment healthier and more productive and remove these aspects that only limit creativity and personal expression.

SKA: Yes, I write for the Alliance of Women Film Journalists out of New York.

RH: Oh, I said the right things and to the right person. I mean, and you know, I salute activists on the subject, and I feel good about Imagine and what we’ve always stood for in that regard. But we’re doing more too. And it’s becoming a front row, front of mind issue, and that’s a great fun thing.

SKA: Wonderful. What advice do you have or what procedures do you see we need to get female director, writers work greenlit?

RH: You know what? It’s underway. I mean, I’m on the board of the DGA, the Directors Guild of America. I know what those initiatives are. I think the most important thing is that, on the television side, which is the training ground for many of these filmmakers and producers, writers, directors, that it’s exponential the number of women who are coming in and proving themselves and of course proving themselves very brilliantly. But I also think of course that’s that signal to other women that, Well, that’s not an uphill battle necessarily, that that’s perhaps an open door.

RH: And at this moment, maybe even more so. It’s almost like, Hey, we’re looking. You know, the industry society is really looking. What have you got? And that’s a question that’s never been asked.”

RH: Companies just want to talk. They want to know. They want to understand what these filmmakers have to offer. And that’s a great thing. So I think it really will be exponential.

SKA: You have such a large body of work. I have to talk about “Rush” for a second.

SKA: What were the challenges of filming that?

RH: It’s not a big-budget film, and so it was made with an indie sensibility and yet an appetite for big-screen quality action. And so there was a lot of pressure on the production. But there was so much; there was a kind of a rawness that came from that. And I was able to create a style that embraced that, and it did work for that era, that seventies period of danger and recklessness. And so I was able to sort of bake that into the aesthetic in a way that worked for us. But it was thrilling. But we had a great screenplay, which is what we had with Peter Morgan, and I also had with Frost/Nixon which Peter Morgan also wrote.

I’d love to tackle another Peter Morgan project again, but he’s been very, very busy with “The Crown.”

SKA: Working with Rob Legato on “Apollo 13” who went on to win the Academy Award for the Special Effects; those ground-breaking special effects that have brought about industry change. Could you please talk to me about that just for a little bit.

SKA: And by the way Rob’s “Special Effects” TED talk is so amazing.

RH: I haven’t seen his TED talk. I’ll have to check it out, he really is remarkable. It’s an important field to go into because there’s now a new meat and potatoes aspect to visual effects that are also valued. So spectacle, and fantasy world creation, are now the headline jobs. But this other thing which has become vitally important which is it just allows filmmakers to get closer to their vision. Whether that means a simple thing like being able to shoot a shot and make it look like it’s 1822 when in fact there were a couple of buildings in there in reality, but you do a bit of this and a bit of that, and for not a big amount of money, an independent filmmaker they can give you a David Lean epic image. It also allows filmmakers to get closer to the images that they have in their head in a more efficient and cost-effective way.