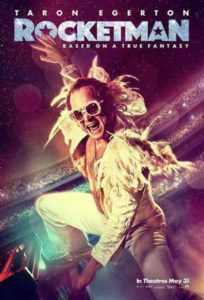 “Rocketman” is a musical fantasy, of Elton John’s breakthrough years. Taron Egerton plays Elton with flamboyant style and exuberance. He also uses his own singing voice to take us down memory lane. The film gives us a rare look at Elton as a child of a loveless father played by (Steven Mackintosh) and a selfish mother (Bryce Dallas Howard), with Jamie Bell as Bernie Taupin Elton’s song writing partner.

If you’re an Elton John fan at all, you’re going to love this movie. It’s creative, dazzling, heartbreaking and most of all fun. We learn how Elton took charge of his music and finally his life.

The set designs and the costumes are bright, colorful and oh so sparkly! Look for costume designer Julian Day to receive an awards nomination.

Perhaps the best element of this Musical is the fast paced choreographed dance moments combined with all of the cast breaking out into song at any given moment.

Check out my radio podcast on Hollywood 360 Radio Network: