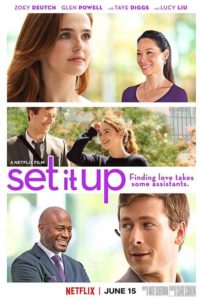 Netflix Sets Itself Up for a Future in Rom-Coms

It seems as though finding a healthy work-life balance is a struggle for many Americans these days. People are constantly on the go and connected to work with mobile devices. As a result, personal lives and relationships suffer. Now imagine trying to find a healthy balance for oneself when your boss completely prioritizes their job above all else and doesn’t see why their subordinates should be any different. This dilemma is at the heart of the Netflix original film Set It Up, which follows two young assistants who each have workaholic bosses that deny them any semblance of life outside of the office. The two ultimately band together and connive to set up their bosses in a relationship so they can regain their personal lives.

The rom-com opens with a montage of highly stressed young professionals hustling across New York City for their bosses. At the end of this scene we meet the two main characters, Harper and Charlie. Harper (Zoey Deutch, Why Him?, 2016) works as the assistant to Kirsten (Lucy Liu, Future World, 2018), a famous sports journalist who is now running her own start-up sports website. Harper has dreams of writing articles herself but spends all of her time managing Kirsten’s overactive calendar. Similarly, Charlie (Glen Powell, Hidden Figures, 2016), works for Rick (Taye Diggs, ‘Till Death Do Us Part, 2016), a celebrity venture capitalist, who is demanding and demeaning to Charlie, but has connections in the business world, so Charlie is willing to suffer to get his foot in the door.

One night, both Harper and Charlie are panicking as their bosses suddenly decide they want dinner well after-hours. They run into each other in the lobby of their office building. Harper, who ordered food, is out of cash and Charlie “steals” the meal from her as he can pay for the delivery. After she explains that she will be fired if she doesn’t come upstairs with a meal, Charlie reluctantly splits the meal with her. Naturally, when they return upstairs with the hard fought meals, their bosses don’t even remember asking for the food and walk out the door.  Harper returns home to her apartment (as she had to cancel a date) and is surprised to find out her roommate Becca (Meredith Hagner, Ingrid Goes West, 2017) and her boyfriend just got engaged, which reinforces her plight. Meanwhile, Charlie tries to race over to his model girlfriend’s apartment, but it’s too late in the night and his seemingly self-absorbed girlfriend sends him home so she can get her sleep in. The next evening, Harper pays Charlie back at his office and the two commiserate over some alcohol. They realize that until their bosses have something else in their lives besides their work that they won’t ever have any free time and decide to secretly set them up.

Set It Up is a light-hearted comedy during a year when romantic comedies and even comedies in general have been in somewhat of a slump at the box office. This film, which was released through Netflix, can be predictable at times, but offers enough laughs to make it worth watching, especially the failed attempts to set-up Rick and Kirsten. It also offers solid performances from its two young leads. Zoey Deutch, the daughter of actress Lea Thompson, is very likable and natural in her role, as is Glen Powell, whose most notable screen appearance was the astronaut, John Glenn, in Hidden Figures (2016). Both Powell and Deutch have solid chemistry and carry the movie with their scenes together. Although Taye Diggs and Lucy Liu, who play their demanding bosses, are serviceable with their performances, their relationship is really secondary to the scenes with their scheming assistants, so it’s difficult to fully invest in their characters. In fact, with so much of Rick and Kirsten’s courtship off screen it’s hard to believe they would even date each other given how brutal we have seen them act towards others. Fortunately, due to the charming performances from Deutch and Powell, audiences will prefer spending time with them and their friends (which includes SNL alumni Jon Rudnitsky and Pete Davidson) over their tough bosses.

Bottom Line: Despite its predictability, Set It Up has all of the rom-com ingredients: meet-cute, feel-good vibe, somewhat cheesy, unrealistic scenarios, good chemistry and attractive leads. If you are in the mood for a light-hearted flick, search in Netflix, it’s worth the click.