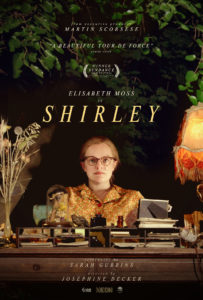 It’s a drama set after the release of Jackson’s famous short story, “The Lottery,” in 1948. When newlyweds Rose (Odessa Young) and Fred (Logan Lerman) arrive at the Jackson-Hyman home upon Stanley’s invitation, a psychological dichotomy ensues.

Director Josephine Decker’s feature debut “Madeline’s Madeline” (2018), is a tale centered on a young woman whose grip with reality slowly weakens as she finds her imagination being made real. The theme is the perfect groundwork for Decker’s follow-up film, “Shirley.” The lovely, eerie, dreamy tone, sets the stage for dramatic exploration into the psyche of Shirley Jackson, with Elizabeth Moss diving into her performance head-first.

An intriguing view is taken as we are shown a madness that is not chemical-based; instead, what plagues Jackson and her houseguest, are the societal rules and expectations placed upon women. The mundane tasks of wifely duties. As Jackson spirals downward, her only saving grace is her incessant need to write her novels, seeking the high that creation brings.

The Bottomline: I’m Way in 4 stars out of ★★★★ Moss and Stuhlbarg are absorbing in their roles. The toxic relationship between Jackson and Stanley is similar to watching “Who’s Afraid of Virginia Wolf.” Director Josephine Decker creates a taunt spellbinding thriller.

Check out the Radio Podcast on Hollywood 360 Radio Network: http://www.hollywood360radio.com/shirley-and-outer-banks-season-1/