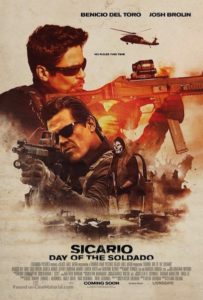 Violent anti-heroes (CIA operative) Josh Brolin and (ex-lawyer, prosecutor, hit-man) Benicio Del Toro minus the much-needed government moral compass of (FBI agent) Emily Blunt reprise their roles in the sequel to Sicario (2015). The film is problematic on several fronts; besides the omission of Blunt’s character: there’s been a director change, (Denis Villeneuve to Stefano Sollima) a cinematographer change, (Roger Deakins to Dariusz Wolski), and a composer change (the late Jóhann Johannsson to Hildur Guđnadóttir). To its credit, the screenplay writer remained—Taylor Sheridan, although here—the narrative slights developing key characters.

Should you see Sicario, before viewing Sicario: Day of the Soldado? Yes, I highly recommend you do see that excellent film as you’ll have a real sense of the problem of the drug cartels that rule the human trafficking in Mexico, but more importantly the original movie creates empathy for the broken family system that is generated by the cartels and frankly, the overall system itself. Day of Soldado’s general tone is different than its predecessor, due to all of the new principal film positions, especially noticeable is the cinematography—no sweeping memorable or gorgeous landscape wide shots, however, you can sucker me in any time with those night-vision infra-red birds-eye shots as in Navy Seals (1990) or any of the related ‘operatives parachuting in at night’ scenes—I love them.

In short, the plot starts at the Texas border; we learn that ruthless drug cartel gangs control the border and that drugs are no longer the most lucrative commodity— human trafficking has replaced them. To illegaly leave Mexico, one must pay a $1000 upfront for each member of the family. For the cartels, it’s an efficient way of making more money with less risk. We also see it’s easy money on the USA side, as a dual passport carrying 14-year-old Miguel Hernandez (Elijah Rodriguez, Book of Life voice 2014) is cajoled into the cartel as he’s told, “You can make what your dad makes in one year by working only one job.” Later, we see a blonde mom pulling up in an SUV with an infant in the backseat, (she’s Miguel’s ride after his job) she says to Miguel, “Where else can you make three times as much driving.”

While witnessing the trafficking at the border, we view a guy blowing himself up, as the alternative to being caught—in Kansas City, suicide bombers explode bombs inside a large store killing people. A mom begs for she and her daughter’s lives to be spared as they’re near the entrance and could simply walk out—nope, another bomb is exploded right in front of them. As viewers we know we’re in for payback as suicide bombers are crossing the border from Mexico to gain access to USA soil.

Josh Brolin and Benicio Del Toro’s initial scene ‘sets the bar’ for the entire film as Del Toro asks for “No rules this time,” and his wish is granted. Brolin’s basic answer, ‘I’m turning you loose, on Carlos Reyes and you’re going to help me start a war with everybody.’ They begin by plotting to kidnap Reyes daughter, the spunky 16-year-old Isabel Reyes (Isabela Moner). The abduction is to take place in Mexico City after the target is picked up from school. The duo, discuss the plan as being sloppy, but sloppy is good as the goal is for crime boss Reyes to think a rival cartel gang is responsible.

After Isabel’s capture, the film boils down to a slow simmer, especially when she and Del Toro are on the run back in Mexico. Dell Toro begins to relate to Isabel’s plight and starts to have a soft spot as her protector. From the first film, we know that his daughter was kidnapped and suffered a horrible death at the hands of the cartel. The film heats up once he’s near the border. Also, when dad-mode kicks in—he’s single-minded, while plotting to keep her safe, his quick thinking and counter moves are incredible to view.

Del Toro clearly takes the lead in Day of the Soldado —his character is front and center—and we, as the beneficiaries, witness an outstanding performance. Without giving out key plot points, let’s just say that he’s the target of a point-blank shooting, and reappears so bloody that he resembles and acts as a war-torn zombie. In comparing the two films, this one is more violent, more confusing and cinematically not as appealing. The score contains loud crackling noises, followed by low bursts of repetitive cello staccato tones, definitely not as pleasing. And—a government moral compass is needed, there’s none to be found here, Emily Blunt’s character could have helped. Also, the ending has a set up for a third film.

The Bottom line: Benicio Del Toro soars, giving an outstanding performance with the same intensity as his Oscar-winning performance in Traffic (2000), although too many changes in the production team and lack of script development for characters.