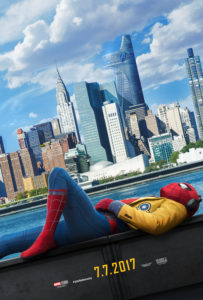 Spider-Man: Homecoming provides the new charming Spider-Man/Peter Parker (Tom Holland) with his own feature film. However, it’s the sixth film in the series, and he’s the third actor to don the suit. The idea of an immature, untrained neighborhood Spider-Man, as in Holland’s, does bring a fresh look and feel to the franchise. In addition, Michael Keaton as the sinister villain ‘The Vulture” brings a sympathetic nudge toward an anti-hero. Let’s just say there’s enough brilliance to the film and its script to recommend seeing it in the theater. 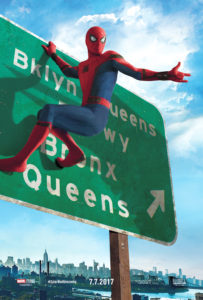 Other cast in the film include a young, hot-looking Aunt May (Marisa Tomei); Tony Stark/Iron Man (Robert Downey Jr.); Jon Favreau as chauffeur/henchman Happy Hogan; Jacob Batalon, Peter Parker’s best high school friend; Laura Harrier as Liz, Parker’s love interest; Zendaya, Michelle, a member of the Academic Team and a fringe friend; and Tony Revolori, Flash (remember the lobby boy), as another member of the Academic Team who antagonizes Parker. The high school kids have a diverse assortment of personalities and backgrounds; they are a well-cast group. Odd in an action film, each is written with humor and enough depth to create a group of teens such as John Hughes’ Breakfast Club. The ensemble of a group of “good kids” creates   a strong model as they set an example of how high school students work hard to achieve success.

Tony Stark/Iron Man, who mentored Parker in the prior film, Captain America Civil War, takes a backseat in Spider-Man: Homecoming, which makes for a better-centered film. Parker continually is trying to coerce Stark into letting him fight crime in his slick Spider-Man suit, and at every turn, Stark is saying no way! What occurs is that Spider-Man does find a way to go at it alone, and thus we see his trials and tribulations. The approach works, and it is refreshing.

Keaton recalls his title role in Birdman, which gets a little perplexing at times, but he’s such a pro that no matter what character he’s playing, he typically steals the show. His acting is superb here and a delight to watch. His character is working on refurbishing alien-tech weapons that were left over from the Avengers’ battle. This is where the film begins, with Keaton as a down-on-his-luck hard-working guy whose company is taken away from him. When viewing the same guy eight years later, he’s become jaded and bitter.

You’ll see a huge set design piece as the New York Staten Island Ferry is split in two. The special effects are eye-popping during these sequences as Spider-Man lassos both sides of the ferry with his webs and tries to pull it back together. Washington’s National Monument becomes a vertigo-inducing rescue at the top of the building, with fantastic cinematography at varying angles. Drones are used by both Spider-Man and The Vulture, raising the technological bar and by showing us how to use them for other purposes. 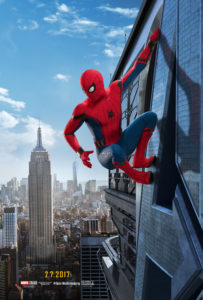 The main plot point to remember here is when Parker tells Stark, “I’m nothing without the suit,” Stark replies, “Then you shouldn’t be wearing it.” A considerable amount of the film is focused on Parker finding the courage to be himself, which is always a good life lesson in any film. Certainly, I enjoyed the light-hearted tone and of course the humor scattered throughout.