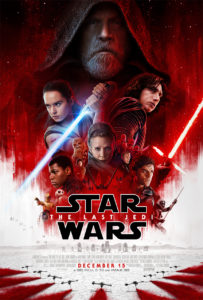 You’re in for a fun-filled time at the theater as Star Wars: The Last Jedi’s sweeping space landscapes and humorous tone bring the forty-year saga full circle. I’m absolutely pleased to report that it’s also a tribute to the first beloved film’s characters, while highlighting Carrie Fisher, who passed away last December. Fisher is onscreen early in the film and remains front and center throughout; her scenes with Mark Hamill are nostalgic, garnering images of the initial film. This ninth film in the series picks up where Star Wars: The Force Awakens left off. It ranks high on my list of the Star Wars collective films and in my Top Ten Best Movies of 2017.

Where were you when you first watched Star Wars? Was it at home or at the theater? Did you know, the first film only opened in 32 theaters on May 25, 1977, on a Wednesday, and then spread to 43 in subsequent days?

Upon reflection of the forty-year ‘Star Wars’ film franchise, my mind unconsciously rewinds to my first viewing of Star Wars in 1977. I was with my parents at the Oak Brook Theater in Oak Brook, Illinois. From the get-go, the film was mesmerizing, the ultra-cool “space writing” on the screen accompanied by the astounding John Williams score set the sci-fi tone in a new and clever way. When the credits rolled, what I remember most is the feeling that I had just experienced something special, something new, and certainly something ground-breaking in filmmaking; indeed, the bar had been raised. Mostly what I have always treasured about the film are the unforgettable characters: Leia, Han, Luke, Obi-Wan Kenobi, “Chewy” Chewbacca, R2D2, C-3PO, and Darth Vader. 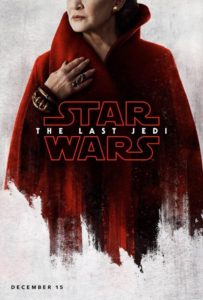 Three story lines are woven together with hope at the core. Leia opens the film in command of the spaceship; she gives orders in “hopes” that the combative attack by Snoke the Supreme Leader of the First Order will be averted. Rey (Daisy Ridley) seeks “hope” on an isolated island that Luke Skywalker will teach her the ways of a Jedi Warrior. Poe (Oscar Isaac) and Finn (John Boyega) leave the base ship in “hopes” of finding another way to stop the First Order from destroying their colony. I suppose one could say there’s another story-line of hope, and that would be Rey’s desire for Keylo Ren, Darth Vader’s grandson (Adam Driver) to turn from the dark side toward the light of the Force. 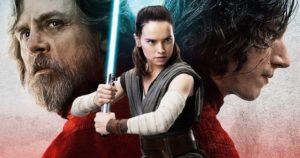 Disney has asked that critics not give away too many details of the film, as it’s best seen as a surprise and I will honor that request. For the remainder of the review, you’ll find highlights or tidbits that don’t give away any plot points that merely serve as an enticement to see the film.

I’ve mentioned that R2D2 does make an appearance; he does connect with Luke and shows him the Princess Leia hologram from the 1977 film that blew everyone away in which she states, “Help me, Obi-Wan Kenobi: you’re my only hope.” A rather complacent Skywalker replies, “That was a cheap move.”

Laura Linney (Vice Admiral Amilyn Holdo) is a fabulous new addition to the series. She wears a light purple wig and grey dress. Her strong demeanor works as she shows her power to Poe when she says, “You’re trigger-happy and impulsive.” The scenes with her and Carrie Fisher are touching as they repeat the famous quote “May the force be with you” simultaneously.

Are there light saber duels and full-out battles? Of course. The scenes with Ren and Rey are particularly intriguing, as Adam Driver has fully stepped into his dark character, giving a riveting performance.

There are a few moments, in particular when Rey’s in the mirror cavern, that drag on or are simply too long, but that’s not enough to totally not see the film, but it is enough to not grant four stars. The film does need to be tightened in spots and edited a bit more.

Lastly, Luke has a chance to shine, and does as Yoda returns to give him more wisdom and teachings. We see the sacred Jedi books destroyed, only to be the opening for a joke: apparently, “page-turners they are not.”

The best advice is to sit back, relax, munch on your popcorn, and enjoy this entertaining film that will fill you with incredible nostalgic memories of a beloved classic film.

The Bottom line? An epic blockbuster of a film that pays tribute to the past and launches us into the future.