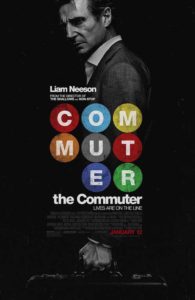 Liam Neeson stars in yet again; another action film where his family is threatened with death−and, yet again he’s in a race against the clock as time is never on his side. The Commuter is an action and drama from Lionsgate Studio. Neeson, a seasoned action-hero found success in the genre with the film Taken. Here he reunites with French director Jaume Collet-Serra as their three films: Unknown, Non-Stop, and Run All Night, were box office hits.

Neeson plays an ex-cop who changed jobs ten years ago to work as an insurance salesman. At the beginning of the film, we view his daily train commute into New York City band are introduced to his everyday riders. One particular day appears to start out normally like every other day except the commute home becomes a nightmare.

He’s blackmailed by a mysterious unnamed woman played by Vera Farmiga into finding the identity of a passenger on a train before the last stop.

Audio clip−Farmiga, “Someone on this train doesn’t belong, all you have to do is find them. In the bathroom, there is $75,000 only if you do this one little thing.”

The 6’ 4” Neeson is perfect as an action hero, and this is the fourth action movie he’s completed with director Jaume Collet-Serra.

Audio clip− Neeson, speaking to a friend, “I’m not going to do this, someone is trying to set me up. If I identify them someone on this train’s gonna kill them. Farmiga, “No one forced you to take that money. You have no idea who you’re up against. I’m done playing games−Now everyone dies.”

The screenplay writers are Byron Willinger and Philip de Blasi.

Ok, I’m a Liam Neeson fan but he needs to find better scripts. This one is way too long, overly complicated and unrealistic.

At one point during a dramatic scene, several people in the audience were laughing…including me.