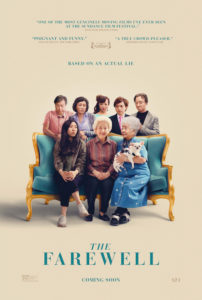 A Heartfelt Look at Culture and Family Traditions

“The Farewell is based on writer and director Lulu Wang’s profoundly personal experience. At the age of 6, she and her family left China & settled in NY.

The Dilemma—The Chinese Custom is not to tell an older adult the truth about their impending death, especially if the illness is cancer. The talented AKawFina, who wants to tell Grandma the truth, plays American raised Lulu.

This is an excellent film; I always appreciate a cross-generational film; the scenes with the daughter, mom, and Grandmother are all heartwarming with a natural feel.

The performance by Akawfina is a standout; it’s refreshing to see her in a dramatic performance, although there is plenty of comedy here too.

I interviewed Lulu Wang in Chicago, and she told me that she loved filming in her Grandmother’s hometown in Changchun, China. 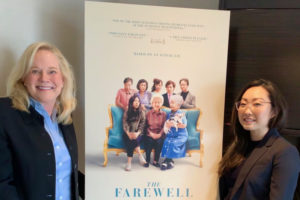 Here’s the link to my interview: https://www.sarahsbackstagepass.com/interview-with-lulu-wang-the-farewell/

I also introduced the film during the Mendocino Film Festival in Fort Bragg, California at Coast Cinemas June 1, 2019

Here’s the link to the podcast on Hollywood 360 Radio Network: