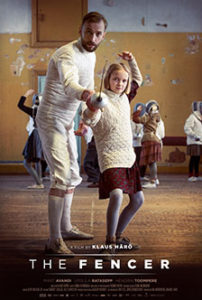 This inspiring universally themed fictionalized story of Endel Nelis (Märt Avandi) an Estonian fencing champion who becomes a role model and mentor to students in his homeland is my kind of film. It can be categorized as an underdog sports drama, a political thriller, a history lesson in the Russian government of the 50s, but most importantly it centers on the teacher/coach/student relationship and the close bonds that are formed.

The Soviets arrived in Estonia in 1940; they drove out the Nazis and then annexed the country. The Estonian men who had been forced to join the German army were then persecuted, executed or sent to Siberia by the Russian police. Families were broken, leaving many children without fathers or grandfathers. When Nelis shows up in the small village, he’s in hiding, as his forced German past is in question. Used to the life of a fencing champion, the big city of Leningrad, his friends and family, he now has the challenge to carve out a new life for himself.

He’s not prepared to teach the kids, but together, with their help, he finds his way. The children are fearful, carrying the emotional scars of a war-torn country on their sleeves. Soon, the townspeople embrace him thawing his heart toward helping the children achieve their dreams. For a guy that’s never really had to deal with kids, he’s now faced with meeting their expectations. One such student, young Marta (Liisa Koppel), the film’s conscience, doesn’t let him off the hook so easily, she persists until he realizes that he’s in too deep to turn his back, thus causing more trauma for the kids, and he’s their only hope.

The tone of the film is classical, with imagery at the core. The cinematography is stunning, especially the scenes with the fencing lessons. The camera’s birdseye view and tight close-ups of the fencing classes are amazing to view; we are privy to observing the children as they learn to control their bodies in almost a ballet class style. The speed, point, and thrust of the foil comes next, although the children only have wooden sticks to use. The progression is filmed with an artistic tone, enhancing the foundation of the sport.

We are hopeful when two huge crates of fencing equipment arrive from Leningrad, as the children’s overflowing excitement is captured as the camera focuses on their playfulness and delight with the smallest of details; even the packing materials. Now armed with proper equipment the master at his game seizes the opportunity and the kids are eager for the hard work and discipline that will progress their skills in the sport. When a tournament in Leningrad is discovered, the kids question Nelis. Why can’t we go? Aren’t we good enough? Here’s the arch in the film, to go may mean Nelis’s discovery by the Russian police, but to not go deflates the kid’s egos and hopes for true competition.

Above all, the film serves as a tribute to Endel Nelis and the fencing school he started that still operates today. He passed away in 1993.

*Author’s note: In college, I had two semesters of fencing classes and enjoyed it immensely. Later in life, I suggested it to my daughter at around the age of 9 years old. She excelled in the sport and has fond memories of fencing as I do. It’s a sport that can be picked up at any age-why not give it a try? Touché just might become your new favorite word.

The Bottom-line: Inspirational, uplifting, and well crafted film that should appeal to all age levels. Great family film.