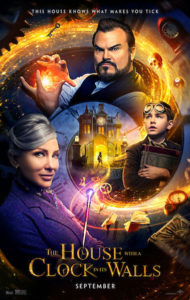 “The House with the Clock in its Walls” (1973) an excellent young-adult novel by John Bellairs, boasts such a plethora of rich vocabulary that it was chosen by school districts in Chicago suburbs during the 80s’and 90s to raise the bar in studying mystery, as a genre. Yes, long before Harry Potter, there was Lewis Barnavelt, a ten-year-old orphan who came to live in a Victorian gothic mansion with his warlock practicing uncle Jonathan and his witch neighbor friend Florence Zimmerman. Sadly, the film version is not the empowering tale kids deserve, nor is it child-centered; here Uncle Jonathan (Jack Black) takes center stage in his flowing kimono while awkwardly goggle-clad Lewis (Owen Vaccaro) is bullied, sprayed with poop and pumpkin slimed. At least those goggles came in handy during filming.

The changes in the book-to-screen adaptation leave much to be desired. Kids need a quality story with a protagonist they can identify with and hopefully learn from. The limited screen time for Lewis is a major error, he’s not developed as a character, and indeed, not enough was written for us to know him. What we see is a timid, nerdy, goggle wearing, physically underdeveloped kid with limited social skills. What we don’t see are interactions between he and others that give us his entire persona. It’s too bad more scenes weren’t added to highlight his intelligence and determination. Sadly the film lacks ‘heart’ especially with the newly written addition of the ominous ‘dead mother’ scenes that border psychotic—these have no place in a children’s movie.

Another example appears when Lewis is bullied at school while upon arrival back at home books from the library bolt from the shelves to attack him, knocking him down, hitting him directly on the head. Yes, we hear him scream and cry again out in desperation—this is a blatant mistake as Lewis should have at least been given him some solace in the security of his home. Instead, back-to-back scenes where Lewis is physically hurt for no reason—give the kid a break already. What are kids in the audience supposed to learn from these scenes—nothing of substance that will add to their repertoire of life skills that’s for sure? Undoubtedly filmmakers are looking for a creepy, disheartening tone, and I might add disturbing.

The film’s central premise mirrors the book, as there is a house with a ticking clock in its walls and a mystery to be solved. Uncle Jonathan and his platonic friend Mrs. Zimmerman (Cate Blanchett) have secrets of their own that are discovered much later in the film, but each agrees to keep lying to Lewis about the villain Isaac Izard until it becomes necessary to bring him up to speed.

The culminating scene is hands-down bizarre, turning “Benjamin Buttoniny” with Jonathan’s adult head on a baby’s body, yep we just saw that in “Deadpool 2” where it was supposed to be funny, here it occurs at a pivotal moment taking all the focus away, again, from Lewis. And yep, that naked adult-headed baby-body creature pees. The ending for all intents and purposes should display growth in Lewis’s fears and underscore his heightened problem-solving skills that occurred in the book, and as a quality children’s film ought to do. That’s apparently not the case here.

The Bottom-line: Disappointing on many fronts, kids and parents deserve quality storylines and memorable characters; my advice is to have kids read the book. Which brings to mind an idea that may serve families well, after reading the book, see the film then focus on comparing, contrasting, analyzing and evaluating all of the differences between the two. If your child is still super excited about the book and the movie, one last activity would be to work in the area of Synthesis, (creating something new from the information) here, kids could create new scenes expanding from the ones in the book that were left out.

* In full disclosure, I taught and developed units of study using young-adult novels for 20 plus years for our school district’s Project IDEA program elementary (4th and 5th grade) gifted reading. “The House with the Clock in its Walls” was taught to 5th grade Project IDEA classes throughout the 14 schools.