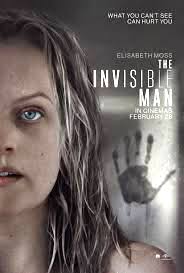 The film is based on the H. G. Wells book, published as a series in 1897; it presents a modern, science fiction horror tale. Elizabeth Moss stars as Cecilia trapped in an abusive relationship with Adrian, played by Oliver Jackson Cohen.

As the film starts, we see Cecilia fleeing in the middle of a rainy night from the home of her boyfriend, Adrian.

The director and writer Leigh Whannell is known for his “Saw” and “Insidious” horror movies.

Wow, what a shocker of a film! Elizabeth Moss is the reason to see “The Invisible Man” as it’s now streaming online. “The Invisible Man is the last movie I saw in the movie theater before the Coronavirus hit the states. I was very surprised by how much I enjoyed the film as I’m not really a horror fan.

The tension never lets up, and you will be on your seat every frame of the film. An award-worthy film for Elizabeth Moss!

Listen to the Radio Podcast on Hollywood 360: http://www.hollywood360radio.com/the-invisible-man-r-★★★★-h360-radio-podcast/