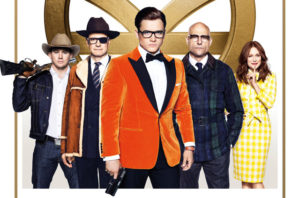 This is the sequel to The Kingsman: Secret Service (2014) A year has passed since Eggsy Unwin (Taron Egerton) and the spy organization Kingsman saved the world, yet lost his mentor Harry Hart (Colin Firth) to a gunshot. The opening scene is worth the price of admission as Charlie Hesketh, a former Kingsman trainee who lost his arm and vocal chords in the prior film, ambushes Eggsy. This insane hand to cybernetic hand combat scene takes place in the back seat of a black cab with the completion in Hyde Park Lake all while Prince’s “Let’s Go Crazy” blares in the background.

Poppy Adams, (Julianne Moore) the world’s largest drug cartel queen, broadcasts a message telling the world about a toxin she laced within every recreational drug available.

Statesman, a secret American organization posing as a Bourbon whiskey distillery in Kentucky introduces us to Jeff Bridges as Agent Champagne and Channing Tatum as Tequila they wear Stetsons and carry electrified lassos to play off the English Bowlers and weaponized umbrellas.

The Bottom-line: This is a wacky film with a fight scene in the Cambodia jungle, inside a 1950s red and white “Diner” set that uses a giant donut (think Randy’s Donuts) for a shield. Elton John is dressed in a peacock feathered suit while he’s kicking some bad guys around while “Saturday (Wednesday) Night’s Alright for Fighting” blares. The zaniness won me over by the film’s endless parade of creative ridiculous gadgets and weapons.