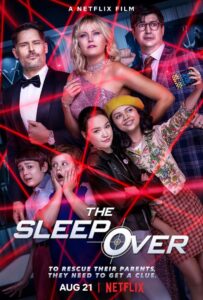 Hi Carl, tonight we have a comedy family movie, “The Sleepover” – by Netflix, similar to the “Spy Kids” movies.

Here’s the story: During a sleepover, two kids in a family find out that their mom, played by Malin Åkerman was not only a thief involved in a life of crime, but she was also engaged to, another man, played by Joe Manganiello all before she married their dad, Ken Marino.

The director is Trish Sie known for her work on the movie “Pitch Perfect 3.”

The Bottomline: I’m in 3 stars out of 4, this is an outrageous, silly family-centered film for the everyone. I didn’t hear any swear words, which was actually refreshing.

Joe Manganiello is hysterically funny, and the filmmakers do make sure he’s costumed in sleeveless shirts just like most of Mark Walberg’s films, but that’s okay, it adds to the comedy.

The kids and teens are engaging, and they look like they are having lots of fun.

Thanks for listening in tonight and check out my website Sarah’s Backstage Pass.com. See you next week.