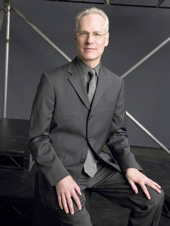 I was granted an interview with Tim before a Liz Claiborne Fashion Show in which he was the emcee. Tim’s official title is CCE Chief Creative Officer of Liz Claiborne Inc. TV Shows “Project Runway” host (2004-2008) 67 episodes, “Ugly Betty” (2007) portrayed fashion reporter 2 episodes

Tim Gunn is really cool, articulate, candid, fashionable and fun! I loved interviewing Tim; he has a way of making you feel very comfortable. His expressions and stories were highly entertaining. Impeccably dressed, he appears very comfortable in a suit and tie. No doubt Tim’s success is related to his endearing personality and attention to detail. For our photo he examined several backdrops for coordinating color and light.

I began by stating that I was thrilled to be interviewing the undeniable “Fashion Guru,” of women’s fashion in American. Tim replied by saying very graciously

“Oh, why thank you, that’s a title I certainly like!”

Sarah A.: Can you tell us the one fashion item that would be the go to item for the suburban women?

Tim G.: I won’t even hesitate, for me it would be a Jacket/Blazer because it can take a pair of jeans and a t-shirt and dress it up and take you out! It’s just so easy to transition. In fact, every woman should keep one in the back of the door in her office. It dresses you up, it gives you some polish.

In fact, this is great! (Tim was referring to my new shiny Easter Egg Pink Trench coat) that I purchased in the Minneapolis/St. Paul airport 2 weeks ago in a wonderful boutique called Radio Road. “You have an eye, I can tell,” Tim continued. (Be still my heart, isn’t this we are all hoping for, just a hint that we might be getting it right?)

Sarah A.: What’s the best part of your job?

Tim G.: Being out here meeting people. It’s an incredible learning experience. People will tell you things face to face that you just can’t get in emails. Phone calls, surveys, just don’t do justice. We need to be out with the retailers and bringing the information back to the designers.

Sarah A.: Will see you on any more Project Runways?

Sarah A.: What’s it like to work with Heidi Klum?

Tim Gunn- Heidi is incredible! She’s smart, lots of fun and of course projects the glamour image for the show.

Sarah A.: Can you tell us about your role on Ugly Betty?

Tim G.: Ugly Betty, was an incredible experience for me. Scripted television is so different. I was so impressed that the 50 extras for the show that were really strategically choreographed. Everything was timed, this one going here and this one going there. Just amazing!

I’ll tell you a funny story; I saw this young woman wearing a track suit around the set, she was about 23-25 yrs. old. I was in the make-up room and she came in to say hello and I was talking to her for about 5 seconds and I shrieked out “You’re Vanessa Williams, I’ve seen you all day and I thought you were a 22 year old production assistant.” And she said “Honey, I’m sticking by you!” I saw her 6 months after that on the Red Carpet when I was covering the Emmys and she just looked incredible! 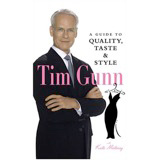 Tim G.: It depends upon you, I mean color is ‘go to’ for summer definitely, but I wouldn’t say a specific color because it would depend on your skin tone and what you respond positively to. I will say the orange in the Liz Claiborne line is really great on most women. As I always say, “Try it on.” “Make no assumptions.”

Sarah A.: What was the most challenging part of writing your book?

Tim G.: Writing the book! I was finally getting up and writing at 4:00 am just to get it finished! I’ll tell you something, if you have ever even thought about writing a book; get that notion out of your head! Simply don’t do it! It’s the most difficult thing I’ve ever attempted. (Tim stated with a twinkle in his eye.) 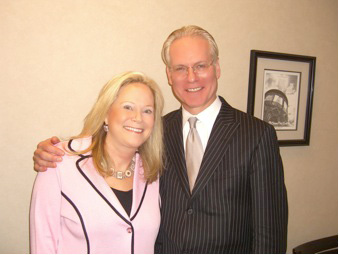 Tim scoured the offices for the perfect backdrop for our photo.