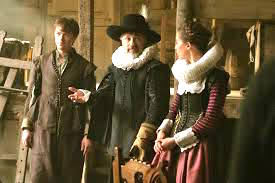 The setting is Amsterdam in 1634 and tells the story of tulip mania, aristocrats, servants, orphans, portrait painters, deception, betrayal, and consequences. Based on the best selling book by the bestselling book by author Deborah Moggach, I found the book both engaging and captivating.

A wealthy elderly man—two-time Academy Award winner Christoph Waltz—Cornelius Sandvoort, known as “the King of Peppercorns,” clad in an enormous “Dutch Master” frilly collar, sashays into an orphanage with the sole intent of purchasing a teen orphan that will become his bride. His end-game is to impregnate his child-bride in order to conceive a son that will serve as heir to his fortune.

Cornelius pays for a beautiful teen, age fifteen, Sophia played by 2016 Academy Award winner Alicia Vikander (The Danish Girl). She’s told by the Abbess, “You have been an orphan girl on a stormy sea. Marriage is a safe harbor. Love, honor, and obey.” Cornelius takes her to his home as if he’s purchased a new puppy.

Cornelius decides to have their portrait painted, so people will at least know that even though he and his wife could have no children, he can at least have people think he was a “lucky old dog” to have such a beautiful young wife. Sophia’s not so sure about the idea but is intrigued from the get-go when she meets the young artist Jan Van Loos, played by Dane DeHaan. He, too, is intrigued with her luminousness beauty. An affair starts between Jan and Sophia begin an affair and the film takes many twists and turns from there.

The Bottom Line: Having read the book, I found it both engaging and captivating. Unfortunately, the film adaption never reaches full bloom, but rather wilts, due to a diluted (over-watered) script with extensively over-pruned scenes—with — no rays of sunshine on the horizon.

* Author’s note, Tulip Fever has been a troubled film since its delayed release going back to 2014. No film critics, including me, were able to pre-screen the film. We were also under an embargo with an exact time Friday, September 1st at 8:00AM ET and 5:00AM PT of when we could write anything about this film. Strangely, all of the promotion quotes for the film are from book authors.