Fred Rogers An American Hero to Children of the World

Won’t You Be My Neighbor? by director Morgan Neville offers an in-depth look at Fred Rogers, the man behind the PBS children’s program, Mister Roger’s Neighborhood spanning several decades. If you were lucky enough to either grow up watching the TV show or to have children that you watched the show with—you, my friend are fortunate indeed—if you’re learning about him for the first time, you’ll appreciate knowing that a kind, gentle man served as a true hero to America’s youth. Indeed the film stays with you long after the credits roll. It washes over you like Linus’ powder-blue security blanket in the Charlie Brown comic strips—it truly renders a poignant—yet enlightening story behind Fred Rogers. It’s high on my list as one of the best documentaries I’ve ever seen.

And how exactly did Neville manage to shape an amalgamated portrait of an atypical human being, while creating such a satisfying film? I believe part of the reason is the straightforward honesty of the key interviewees in the film especially when they are relaying first-hand stories of how Rogers’s friendship enriched their lives. Neville, actually got the idea for the film when working with cellist Yo-Yo Ma, he asked him how he handled fame, Ma said his friend Fred Rogers taught him about that, and that’s when Neville decided to dig deeper. Ma is featured in the film relaying touching stories about Rogers.

Another affecting friend and actor on the show, Francois Clemmons who performed the role of Officer Clemmons for 25 years, (the friendly neighborhood policeman), who is now openly gay, and when asked directly if he thought Rogers was, he says, “If he was, I would have known it.” There are other scenes in the film with Clemmons that will bring tears to your eyes, primarily when he speaks of Fred as his surrogate father. 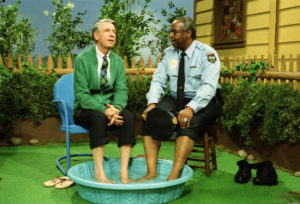 Joanne Rogers, his wife is a ray of sunshine, having met in college; they married, had two sons and remained together 52 years until his death in 2003. She has plenty to say about the accomplished life of her long-time husband; she serves as the cornerstone of the film.

You can’t help but marvel at the calm, caring and loving nature of Fred Rogers, especially when you discover the overwhelming—concern, thought and hard work that encompassed a single children’s TV show production. The clips of the shows speak loud and clear for themselves; although Rogers was never loud, he was soft spoken, he spoke slowly, and sometimes he offered complete silence. It’s clear that Fred Rogers felt a deep, personal responsibility to the children of America, in that, he, taught kids about love and that we love them just the way they are, and not who they will become. He covered the tough topics; death, war, divorce, assassination, separation, the NASA Challenger explosion, parents’ work—all to help children understand the concepts and the feelings that go along with them. He wrote the music and songs for the show, along with performing all of the voices of the puppets. 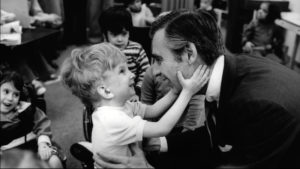 It should be noted that Rogers received numerous awards, including the Presidential Medal of Freedom – the nation’s highest civilian honor – bestowed in 2002, for “his work on behalf of the well-being of children and his career in public television.” He was inducted into the Television Hall of Fame in 1999 after receiving multiple George Foster Peabody Awards, Emmy Awards and “Lifetime Achievement” awards from the National Academy of Television Arts and Sciences. Yet, this humble man never spoke about the accolade’s; he focused his message on empowering the lives of children and their families.

It’s key that we also realize the multi-faceted background of this remarkable person, as it validates Fred Rogers’s life’s work. During High School he was expectedly involved with drama, he spent two years at Dartmouth College, transferring to Rollins College studying music composition classes, earning his BA degree. Upon graduation, he was hired to start a children’s television show, and began taking courses in child development at the University of Pittsburg’s Graduate School of Child Development and simultaneously studying at Pittsburg’s Theological Seminary. Upon graduation from the Seminary, he was ordained as a Presbyterian minister with a charge to continue his work with children and families through mass media.

By all accounts, he was the real deal. Furthermore, most people have no idea that he was instrumental in all aspects of the show. I’m not sure what you’ll do with this information—but I’ve already been revisiting the show on youtube and am here to tell you I’m so pleased to see it with the new understanding that this film has brought to light.